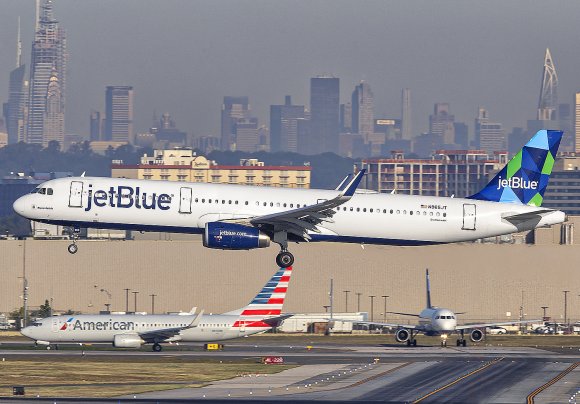 American Airlines and JetBlue Airways asked a US federal court in Boston to dismiss the antitrust lawsuit the US Justice Department (DOJ) filed in September which seeks to unwind the carriers’ Northeast Alliance (NEA) implemented nine months ago.

DOJ has not yet responded to the sweeping 45-page dismissal motion filed by American and JetBlue. The carriers and DOJ have tentatively agreed to a September 2022 trial if the lawsuit is not dismissed. The court would have to approve any proposed trial date.

American and JetBlue said in the court filing that DOJ is wrongly treating the NEA as a de-facto merger between the airlines, when the agreement is designed for both carriers to retain their independence.

DOJ knows that it “is not true” the NEA is a merger “for any number of reasons, one of which is that pricing, a central concern of antitrust law, is not coordinated through the NEA,” the airlines' lawyers argue, adding: “The unambiguous language of the NEA agreements also show that, far from a merger, the NEA is an arm’s-length contractual relationship with carefully defined duties, obligations, rights and benefits. For example, there is a duty on the parties to ‘endeavor in good faith to optimize their respective, individual network plans,’ yet also an explicit reservation of rights for each to make its own final decisions ‘regarding their capacity and their route networks.’ The revenue-sharing terms are nothing like the general pooling of revenues and profits that would occur in a merger.”

The airlines said DOJ is not actually alleging competitive harm in the present, but alleging there will be anti-competitive affects in the future. “Notably, [DOJ] does not allege that the NEA has caused any actual harm, such as increased prices, decreased capacity or decreased service in the months since the implementation,” the filing says. “Nor does it dispute the NEA’s procompetitive effects. Instead, without a single allegation of actual harm, plaintiffs speculate that the NEA will at some undefined point in the future cause capacity reductions and increased fares that will outweigh the procompetitive effects.”

Both airlines have said the NEA is necessary to add a third serious competitor to a New York market traditionally dominated by Delta Air Lines and United Airlines. Because of slot constraints, JetBlue has said it cannot grow in its home New York market absent the NEA. The carriers also said DOJ has wrongly carved Newark (EWR)—situated in a suburb of New York City and viewed by United as its New York hub—out of the New York market when assessing the competitive effects of the NEA.

“Since implementation began in February 2021, the NEA has allowed American and JetBlue to offer consumers the benefits of a broader and deeper network at these airports—more flights and seats to more places—so that each airline can become more competitive with the dominant carriers in the northeast, Delta Air Lines and United Airlines,” the airlines say. “Through schedule coordination, asset swaps, codesharing, reciprocal frequent flyer benefits, seamless service initiatives, and a revenue sharing arrangement designed specifically to incentivize each airline to grow capacity, the NEA makes American and JetBlue more attractive to consumers, more efficient and much more productive with the finite resources available. The NEA has increased output in Boston and New York, including more flights to more destinations and large increases in every airline industry measure of output.”

The carriers said the component of the NEA allowing for slot swaps is especially important to enable JetBlue to grow in the New York market.

“JetBlue has been unable to grow in New York, especially at [LGA], because it has not been able to get access to additional takeoff and landing slots,” the airlines wrote. “Under the NEA, American and JetBlue have agreed to pool their slots at JFK and [LGA]. This allows the parties to make optimal use of their combined slot portfolios, including enabling immediate JetBlue growth and expansion of its low-cost model at [LGA].”

Critically, the carriers said, the NEA does not include pricing coordination, which is usually the main antitrust concern regarding airline partnerships.

Quoting from the NEA agreement, the carriers noted that each airline “will retain full control over all aspects of their respective businesses, including setting pricing for their services.” Further, the carriers said, final decisions over “capacity and network management” are made by each carrier.

The carriers described how the NEA works in practice: “To create the expanded and optimized network, network planning personnel from both airlines endeavor in good faith to optimize their respective, individual network plans. Under this process, American and JetBlue teams together develop and propose detailed schedules, equipment assignments, slot and gate assignments and other logistics necessary to offer consumers the optimized network. For example, the planning teams may jointly develop and propose a schedule of flights for a route, say New York to San Francisco, that will give consumers a wider choice of options throughout the day on a combination of American and JetBlue aircraft.”