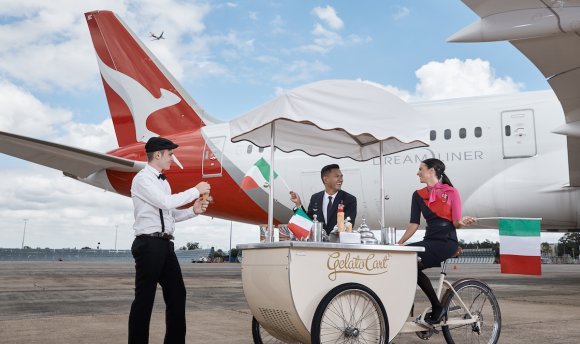 Rome will return to Australian flag-carrier Qantas’ route map from next June for the first time since 2003 as the airline targets a strong rebound for international travel.

The seasonal route connecting Sydney (SYD) and Rome Fiumicino (FCO) via Perth (PER) also marks the oneworld alliance member’s re-entry to the market in mainland Europe.

“Italy is the largest market for us in continental Europe for people visiting family and friends from Australia and we think customers will love flying direct to one of the world’s great cities to spend time with loved ones or enjoy Italy,” Qantas CEO Alan Joyce said.

Qantas has a long history of serving Rome, flying there continuously between 1948 and 2003. However, the airline suspended flights in September 2003, blaming a drop in demand due to the SARS epidemic.

The new route will launch on June 22, 2022, and operate three times per week until Oct. 6 using Boeing 787-9 aircraft. Qantas said the flight would cut more than three hours off the current fastest travel time to Rome.

Passengers will be able to combine the Rome flights with the airline’s Australia-London Heathrow (LHR) services, which are scheduled to be double-daily during the peak northern summer season. Travelers will be able to fly in and out of different cities on one return ticket through to October 2022.

Qantas said it plans to offer connections from Rome to 16 destinations in Europe including Athens, Barcelona, Frankfurt, Nice, Madrid and Paris, as well as 15 points within Italy, including Milan and Venice. Although a deal is yet to be announced, it appears that the airline will partner with Italy’s new state-owned flag-carrier ITA Airways

Joyce said: “We’ve seen amazing demand on our direct service from Perth to London and on our new services to Delhi from Melbourne and Sydney.

“These are exciting destinations and there’s strong evidence the pandemic is making nonstop flights between Australia and the rest of world even more desirable as we learn to live with the virus and its variants.”

Qantas is currently flying to London Heathrow via Darwin (DRW), rather than Perth, saying tight travel restrictions in Western Australia had forced the re-route. However, Perth is expected to return as a transit point from April.

Qantas said it would work with Tourism Western Australia to boost inbound tourism from Europe into Perth and the wider region, promoting the city as a stopover for Australians traveling to Europe from the east coast.