By David Casey and Aidan Mooney

Nuremberg (NUE) is among the latest airports to use Routes 360’s Route Opportunities platform, outlining seven unserved markets that offer the biggest potential for carriers.

Alongside short-haul European cities like Milan, Madrid and Stockholm, the airport is also seeking to attract transatlantic flights to North America and has identified New York as the top unserved destination in the US.

Although Nuremberg is the second largest city in the state of Bavaria with a population of more than 500,000 inhabitants, it remains without US service as airlines focus their attention on nearby Lufthansa hubs in Frankfurt and Munich and the opportunities for transit traffic provided by the Star Alliance member.

However, Nuremberg has in recent years been carving out a niche as a ‘blue ocean’—an airport with a low level of competition, an attractive incentive program for unserved routes, and “enormous latent demand” in its catchment area.

About 4.2 million inhabitants live within a 90-minute driving distance to Nuremberg airport and the region is home to international sporting goods companies Adidas and Puma, as well as the large car parts manufacturer Schaeffler Group.

Looking at the case for a long-haul route to the US, figures provided by Sabre Market Intelligence show that one-way indirect traffic flow from Nuremberg to New York totaled 10,400 passengers during 2019.

However, using ASM’s Airport Catchment Analyser tool, analysis of the wider area suggests that the market is potentially much larger as passengers are traveling 230 km to Frankfurt or 170 km to Munich to fly to New York.

For one-way traffic to the New York region traveling from within a 50 mi. radius of Nuremberg, the number of passengers totaled 27,300 in 2019. This equates to about 75 one-way passengers per day.

Frankfurt (FRA) captured 56.5% of this outbound traffic, while Munich (MUC) accounted for 22.6%. A smaller percentage also traveled via other airports like Prague (PRG) and Zurich (ZRH). 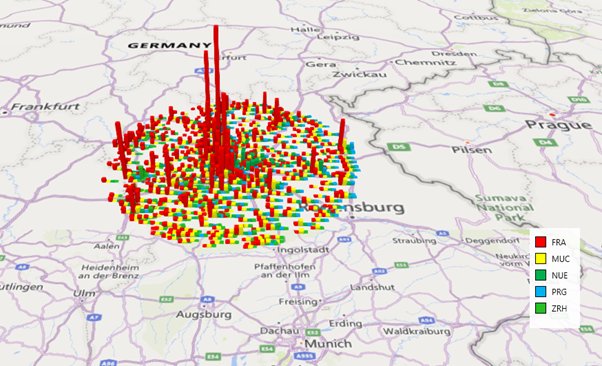 In addition to this leakage, it is interesting to note the potential for traffic from NUE to other points in the US.

Again, using ASM’s Airport Catchment Analyser tool, one-way traffic from within a 50 mi. radius of Nuremberg to destinations in the US other than New York totaled 113,301 in 2019. This equals about 310 one-way passengers per day and highlights the connecting potential through New York.

In terms of stimulating inbound demand, as well as the large corporates based in the region, Nuremberg is a key trade fair destination, a popular river cruise port, and home to one of the oldest and most famous Christmas markets in the world.

The city could therefore offer carriers an alternative gateway to Bavaria, with a lower cost of entry, no slot concerns, and demand for both inbound and outbound leisure and business travel.