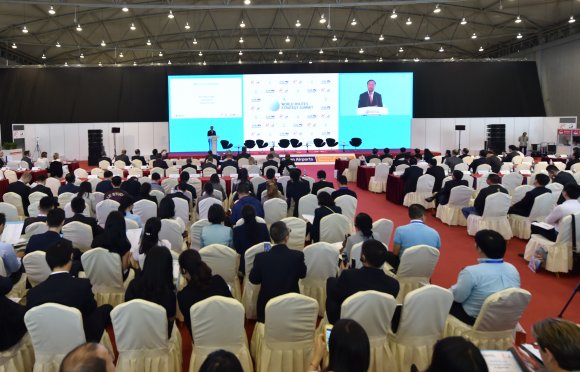 The annual World Routes forum brings together airlines, airports and tourism authorities to plan and negotiate future air services. It moves to a new location every year to shine a spotlight on different destinations across the globe.

The year’s event in Barcelona (23-26 September) has drawn some of the biggest names in aviation. Willie Walsh famously reached the top of the industry, running British Airways and Aer Lingus before taking up his current role at IAG.

Having recently launched IAG’s new low-cost airline LEVEL from Barcelona El-Prat Airport, it will be an opportune time for Willie to talk about why the low cost, long-haul model will dominate the skies by 2020.

Other speakers include Skúli Mogensen, CEO of Wow Air, Tewolde Gebremariam, CEO of Ethiopian Airlines and Giorgio Callegari, deputy CEO of Aeroflot. They will take part in a debate about route development in a world where disruptions such as fluctuating oil prices, rising nationalism and security issues are becoming the norm.

World Routes’ official charity partner is The Travel Foundation which has delivered sustainable tourism projects in 26 countries. The charity will be at the event to explore the role that aviation has to play in the management of global tourism, taking part in panel discussions and talks.

Other topics that will be explored during World Routes include air cargo development, working with the cruise industry to achieve growth, the ways that digital technology will reshape aviation by 2020 and the modernisation of aging airport infrastructure.

Steven Small, brand director of Routes said: “World Routes brings together the leaders who shape route development, direct the aviation industry, and help to influence destinations. What better place to be involved in World Routes than Barcelona – one of the most fascinating cities in Europe.”

World Routes 2017 will be hosted by the Government of Catalonia with support from Barcelona City Council. The conference progamme is sponsored by OAG.

More information is available at routesonline.com