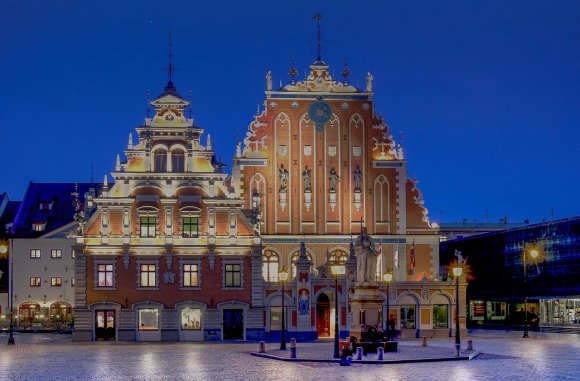 Latvian airline airBaltic is launching scheduled flights between Riga and Manchester from 29 March 2020. Direct flights between the two cities will take place four times weekly on board Airbus A220-300 aircraft. The airline last served the route in April 2010, OAG data shows. airBaltic currently serves two other cities in the UK - year-round flights from London to Riga and Tallinn in Estonia, as well as summer season flights from Aberdeen to Riga.

The hybrid carrier said traffic on its UK routes is 17 percent higher in 2019 than the previous 12 months. Almost one-fifth of all passengers travelling to and from the UK with airBaltic use Riga as a transfer airport. The most popular connections are to two other Baltic capitals - Tallinn and Vilnius - alongside Helsinki and Turku in Finland, plus Moscow, St Petersburg, Tbilisi and Odessa.

airBaltic will compete directly on Manchester - Riga with low-cost giant Ryanair, which has served the route since November 2012. In summer 2020, airBaltic also plans to introduce four more new destinations: from Riga to World Routes 2021 host Bergen, Trondheim and Yerevan, and from Tallinn to Nice.

LOT will launch a direct flight from Warsaw to San Francisco from 5 August 2020, becoming the carrier’s ninth route connecting Poland and the US. Flights to the Californian city will take about 12 hours and be operated four times a week using Boeing 787-8 aircraft.

San Francisco will be the sixth US destination operated directly from Warsaw by LOT, in addition to New York (JFK/EWR), Chicago, Los Angeles and Miami. It also flies to Toronto in Canada from Poland’s capital city. O&D demand between Poland and San Francisco has increased steadily in recent years, data from Sabre Market Intelligence shows. In 2018, a total of 35,464 passengers travelled between Poland and San Francisco, up from 27,558 passengers five years earlier.

Earlier this month, the US formally nominated Poland for entry into its visa waiver programme, making it easier for Polish citizens to visit America. The programme allows travellers from participating countries to visit the US for up to 90 days without obtaining a non-immigrant visitor visa. LOT chief executive Rafał Milczarski said Poland’s entry to the programme would spur further traffic between Poland and the US for both tourist and business purposes.

Indian low-cost carrier GoAir is launching two routes to Singapore, connecting Changi Airport with the cities of Bengaluru and Kolkata. Flights will operate four times per week and three times per week respectively from 19 October 2019.

India is the third largest visitor source market for Singapore and it has flight connectivity from 15 points across the country. In 2018, Singapore received more than one million visitors from India for the fourth time in a row. India is also the top source market for cruise travel. Singapore becomes GoAir’s eighth international destination in addition to Phuket, Malé (seasonal), Muscat, Abu Dhabi, Bangkok, Dubai and Kuwait. The launch of the route comes a year after the airline commenced international operations, with flights between Delhi and Phuket.

The LCC will compete on Bengaluru - Singapore with four other carriers, including budget rival IndiGo. OAG Schedules Analyser data shows IndiGo flies the route daily using Airbus A320, while Singapore Airlines has ten weekly flights on board Airbus A350-900. In addition, SilkAir operates the route six-weekly with Boeing 737-800 aircraft and Air India Express four-weekly using Boeing 737-800