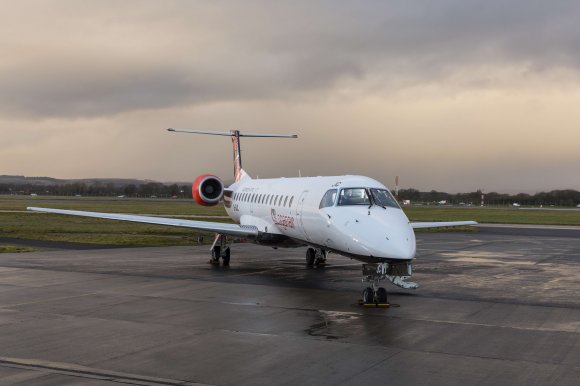 Scotland’s Loganair said it will pick up 16 routes within the UK formerly flown by Flybe, the UK regional airline that ceased operations on March 5.

Nearly 400 new weekly flights will be added to Loganair’s schedule and the airline has created a special recruitment line for former Flybe employees seeking to continue their aviation careers with Loganair.

“The 16 routes—from existing Loganair base airports at Aberdeen, Edinburgh, Glasgow, Inverness and Newcastle—will be launched progressively over the next four months,” Loganair said in a statement.

On March 16, Loganair will launch daily service from Aberdeen International (ABZ) to Belfast City (BHD) and Manchester (MAN), and up to 3X-daily flights to Birmingham (BHX).

Also on March 16, the Scottish carrier will launch 4X-weekly service between Inverness (INV) and BHX, increasing to daily service from March 23.

On March 23, the airline will launch daily INV-BHD service and a 3X-daily service between Newcastle International (NCL) and Southampton (SOU). On that date Loganair will also launch an up to 4X-daily service from Edinburgh (EDI) to MAN, a daily service to Cardiff (CWL), and 6X-weekly flights to Exeter (EXT).

On June 15, the carrier will launch an up to 4X-daily EDI-SOU service and on June 20, Loganair will start 2X-weekly service between EDI and Newquay (NQY). On July 6, the airline will launch daily NWC-EXT service.

Loganair will serve the new routes with its existing 44-strong fleet of turboprop and Embraer Regional Jet aircraft as well as more 70-seat ATR 72 turboprops, which the carrier will take delivery of in the coming weeks.

“The collapse of a long-standing airline like Flybe marks a desperately sad day, especially for the airline’s dedicated team of employees and for customers facing disruption to their journeys,” Loganair CEO Jonathan Hinkles said.

“By stepping in quickly with a comprehensive plan, Loganair is aiming to maintain essential air connectivity within the UK regions to keep customers flying, and to offer new employment to former Flybe staff members who are facing an uncertain future today.”

Belfast City Airport CEO Brian Ambrose commented: “We are pleased to announce that our current airline partner Loganair has confirmed it will commence daily services from Belfast City Airport to both Aberdeen and Inverness. These are two of the popular destinations that were previously operated by Flybe.

“We’re very happy that Loganair has been able to backfill these routes less than 24 hours after Flybe entered administration. There remains a strong demand for the network operated by Flybe and we expect further announcements from airlines in the coming days and weeks.”