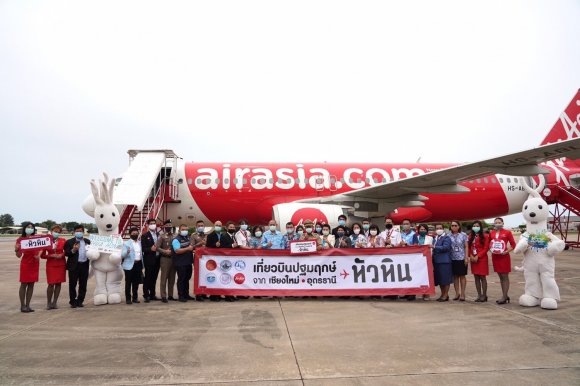 Thai AirAsia has opened a new hub at Bangkok Suvarnabhumi (BKK), returning to the airport after an absence of almost eight years.

The move means the airline becomes the only carrier in Thailand to fly from both of the capital’s international gateways, BKK and Don Mueang (DMK).

“Suvarnabhumi Airport is an excellent aviation hub with easy access to the city center and high potential for international connecting flights in the future,” Thai AirAsia CEO Santisuk Klongchaiya said.

“This should pave the way for new travel groups and enable us to better utilise our planes.”

Klongchaiya added that the opening of a BKK hub would broaden the carrier’s appeal with passengers and create much-needed new revenue streams in the wake of the COVID-19 pandemic.

“AirAsia continues to seek out new business opportunities within present circumstances to maintain our leadership in the market and help with the revival of our economy,” he added.

Thai AirAsia left BKK in September 2012 after consolidating its Bangkok operations at DMK. However, Airports of Thailand last month approved the LCC’s request to return.

The decision will turn up the pressure on Thai Vietjet, previously the only LCC based at BKK. OAG Schedules Analyser data shows the airline was the fourth-largest carrier at the airport in 2019, offering 1.4 million departure seats. About 1.1 million of those were on services within Thailand.

Thai Vietjet operated five domestic routes from BKK during the year, but its network has swelled to eight in recent weeks as Thailand’s tough coronavirus-related restrictions on international flights means airlines in the country are fighting it out for domestic market share.

OAG data shows Thai AirAsia already flies from DMK to all four destinations being launched from BKK. The LCC competes with rival Thai Lion Air each one and with Nok Air on three of the four.

The launch of the new BKK base comes days after Thai AirAsia launched two new routes within Thailand, connecting the beach resort city of Hua Hin (HHQ) with CNX and Udon Thani (UTH). The routes are the carrier’s first scheduled services from HHQ.

“This is the very first time the carrier is flying to Hua Hin and we are pleased with the early demand for these new services with both routes registering a staggering 85% load factor,” Klongchaiya said.