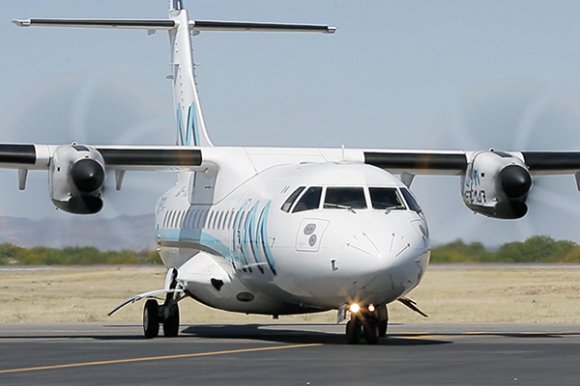 Aeromar is poised to open a second service to the US over the coming days—one of three new routes being launched in October—as the Mexico City-based carrier rebuilds and reshapes its network in response to travel demand.

The route between Mexico’s capital and the Texan city of Laredo, the third-most populous on the Mexican border, will operate 3X-weekly from Oct. 5 on board ATR 72 aircraft. Final contract negotiations were completed earlier this year at Routes Americas 2020 in Indianapolis.

Executive director of network strategy, alliances and industry affairs Fabricio Cojuc said the trade agreement between the US, Mexico and Canada (USMCA), which came into force on July 1, was a contributing factor in the decision to launch MEX-Laredo (LRD).

“The Port of Laredo ranks as the number one inland port along the border and two overall in the US, with $232 billion in imports and exports in 2019, yet it is not connected by air with Mexico,” he said.

“Both the overall trade agreement framework and lack of scheduled airline service are two key drivers in understanding the rationale for our having looked at this opportunity.”

Aeromar originally planned to begin MEX-LRD in May, but service was delayed because of the COVID-19 pandemic. Cojuc said the current land border crossing restrictions in place between Mexico and the US make the route “even more compelling.”

Two other services are also being launched by the airline next month, with flights from MEX to Aguascalientes (AGU) and Queretaro (QRO) starting on Oct. 5. Both domestic routes will be served daily using ATR 72.

According to data provided by OAG Schedules Analyser, Aeromar is this week (w/c Sept. 28) operating about 17,200 departure seats across 240 flights. This compares with about 32,800 seats and 500 flights during the same week a year ago.

Cojuc said the carrier is taking a “prudent, common sense and fact-based approach” to its network rebuild, concentrating on the most profitable services.

“Rather than looking at expanding the network, we have focused on making our route structure more competitive and efficient as a top priority, by leveraging the economics and gauge of our ATR fleet, which are a big plus in a depressed demand environment,” he said.

“We have also selectively reduced or suspended service in about a third of our network since May, due to poor performance or irrational competition conditions, thereby making most of our departures cash positive.

“For the immediate future, in order to diversify our revenue sources, we will base one ATR 72 in Cancun to operate an ambitious Cuba passenger charter program.”

Cojuc said that the slower recovery of business travel, typically the airline’s “bread and butter niche,” has forced Aeromar to look more towards leisure markets. The carrier is also seeking out opportunities through partnerships.

“It makes good business sense in light of the harsh demand conditions we are facing and our combined small size relative to the larger players,” Cojuc said.

“Our two networks are overlap-free. Our quality of service philosophies and key value propositions are fairly similar and compatible. We complement each other well distribution-wise too. It’s a win-win for both airlines.”

Overall, Cojuc said demand has recovered to about 45% of pre-COVID-19 levels, with industry capacity at about 60%. He expects domestic demand to be in the region of 60% by the end of the year.