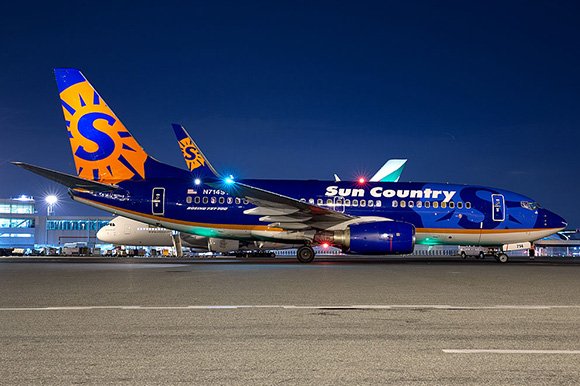 Sun Country turned a profit in the third quarter of this year and expects to return to full capacity within 12 months, according to CEO Jude Bricker.

Speaking at TakeOff North America 2020 in Denver this week, Bricker told delegates that the flexibility of the Minnesota-based leisure carrier’s business model has enabled it to better weather the COVID-19 storm than many other US counterparts.

“My view is that we’re going to see a linear recovery from where we are now, which is down about 40%, to a full recovery this time next year,” he said. “Everyone’s talking about how much money airlines are burning every day; well, we’re building cash. It’s a really positive story.”

Sun Country’s network is predominantly designed for the Minnesota-originating customer, with southbound winter destinations and more “big city” connectivity in the summertime.

On the leisure passenger side, Bricker said routes to popular outdoor destinations such as Tampa (TPA) and Fort Myers (RSW) from its Minneapolis-St. Paul (MSP) hub have held up well during the coronavirus crisis. But he stressed that maintaining a flexible route network remains vital.

“Everything is variable,” Bricker said. “I can't predict the future, so I want to be able to adjust to it. That is basically what we're doing right now – and why we’ve been so successful in this environment.”

Bricker explained that capacity can be quickly added to any destination that has demand from its source markets of Minneapolis and Dallas. “We can be there for those markets,” he said, “even it’s for a relatively small travel season.”

However, key to Sun Country’s success during the pandemic has been a cargo service deal struck with Amazon in December 2019. The contract, which sees the ULCC sublease and operate 10 Boeing 737-800 aircraft from Amazon, began in May.

“Cargo will make up about one-third of our flying in October,” Bricker said. “That means a third of our businesses is actually really, really strong–and it’s a side of the business we didn’t even have a year ago.”

Looking ahead, Bricker said interline agreements are also under consideration: “The more I can deliver to the Minnesota customer the better. I’m a big fan [of interlining] and I want to do it.”