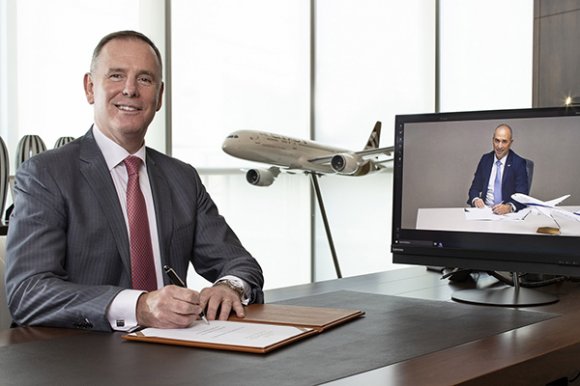 El Al Israel Airlines and Etihad Airways have signed a memorandum of understanding (MoU) that includes potentially starting joint codeshare services between Abu Dhabi (AUH) and Tel Aviv (TLV), as well as on the global flight networks beyond the two carriers’ hubs.

The agreement also contains plans for greater commercial cooperation in the fields of cargo, engineering, loyalty, destination management and the optimal use of pilot and cabin crew training facilities.

The decision to forge closer ties follows the normalization of diplomatic relations between the United Arab Emirates (UAE) and Israel in conjunction with the signing of the Abraham Accords in Washington on Sept. 15.

Earlier this week, Etihad confirmed it would begin a daily scheduled year-round route between AUH and TLV from March 28, 2021. In October, the airline also became the first Gulf Cooperation Council carrier to operate a commercial passenger flight to and from TLV.

Etihad CEO Tony Douglas said the MOU forms the foundation of what he hopes will be “a strong ongoing relationship” between Abu Dhabi and Tel Aviv.

“We look forward to examining ways in which the two flag-carriers—Etihad and El Al—can work more closely together to improve business operations and enhance the experience for our guests,” he added.

In announcing the AUH-TLV route, Etihad joined four other carriers in confirming UAE-Israel services. LCC flydubai will launch direct flights from Dubai (DXB) to TLV this month, while Arkia, El Al and Israir will all start services in December.

El Al CEO Gonen Usishkin said: “This MOU is only the start and we believe that together, the two flag-carriers will be able to provide our mutual customers with the best possible product and service. Already, the common goals we have outlined speak for the success of our future cooperation.”

Etihad and El Al said the MOU would also explore reciprocal earn-and-burn opportunities for its members and how to encourage inbound tourism to both Abu Dhabi and Tel Aviv.