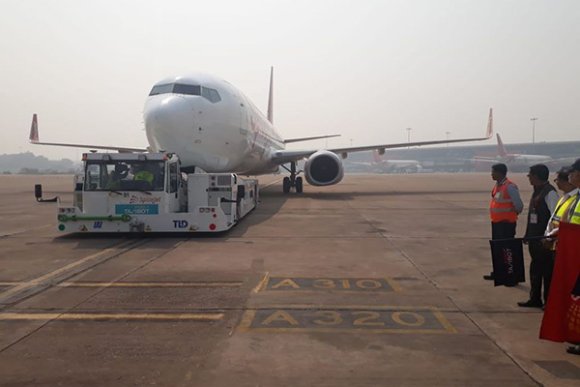 Indian LCC SpiceJet is further expanding its domestic and international network this month as part of a strategy to enhance connectivity between some of India's biggest cities and key non-metro cities.

From Jan. 15, the airline plans to add another route to Ras Al-Khaimah (RKT) in the United Arab Emirates. Flights from Mumbai (BOM) will be 2X-weekly on board Boeing 737 aircraft, while SpiceJet’s existing route between Delhi (DEL) and RKT will double in frequency to 4X-weekly.

The airline operated its first service to RKT in late November and is currently the only carrier offering scheduled nonstop flights between the airport and destinations in India.

OAG Schedules Analyser data shows that BOM-RKT will become SpiceJet’s fifth route to the emirate following the recent launch of flights from Amritsar (ATQ), Cochin (COK) and Jaipur (JAI), in addition to DEL.

The expansion comes more than a year after the LCC announced plans to open its first international hub at RKT and launch a new carrier from the airport, similar to Wizz Air’s strategy in Abu Dhabi (AUH).

On SpiceJet’s domestic network, two new routes are being launched from Jharsuguda (JRG), linking the industrial city in the district of Odisha with BOM and Bengaluru (BLR). Each destination is to be served 4X-weekly. In addition, capacity will be increased on the JRG-DEL route with 737 aircraft replacing Q400s.

From Hyderabad (HYD), the capital of the state of Telangana, the airline plans to commence a route to Vijayawada (VGA) on Jan. 10, as well as increasing flights to Visakhapatnam (VTZ) from daily to 2X-daily. HYD-Tirupati (TIR) will also increase from 2X-daily to 3X-daily.

Elsewhere, SpiceJet plans to begin daily service between BOM and Porbandar (PBD) on Jan. 12, as well as a route between BLR and Belgaum (IXG) on the same day. Service is also being resumed from Kolkata to COK and DEL, while DEL-Dharamshala (DHM) is being increased from 2X-daily to 3X-daily.

“Providing air connectivity to the smaller towns and cities of India has always been a top priority for SpiceJet,” the airline's CCO Shilpa Bhatia said.

“We see immense potential in these routes that will help cater to the increased demand from leisure as well as business travelers besides enhancing connectivity between metros and non-metros.”

She added: “SpiceJet has been relentlessly working towards enhancing air connectivity for Jharsuguda in Odisha and we are extremely pleased to announce a host of new flights connecting the city to the key metros of Mumbai and Bengaluru.”