David Stroud, Managing Director of ASM, assesses where the route development community stands as the hope brought by vaccines is dampened by new variants of COVID-19.

Now in the third week of January, the time has probably passed to wish people Happy New Year, and the turn of the year does now seem some time away particularly considering the eventful times we are living in.

At the start of December, we published our final “Route to Recovery” whitepaper of the year and presented it at Routes Reconnected 2020. It would be fair to say that the tone was optimistic, looking forward to perhaps a defining Summer 2021 operating season that would set the foundation of airline operating schedules and the new basis by which long-term route development would be re-established.

We hadn’t allowed for new, more infectious variants of COVID-19 which has further closed down travel corridors and borders, creating more uncertainty for our industry and highlighted if ever it was needed that the race toward mass population vaccination is one of the most intense we will live through. 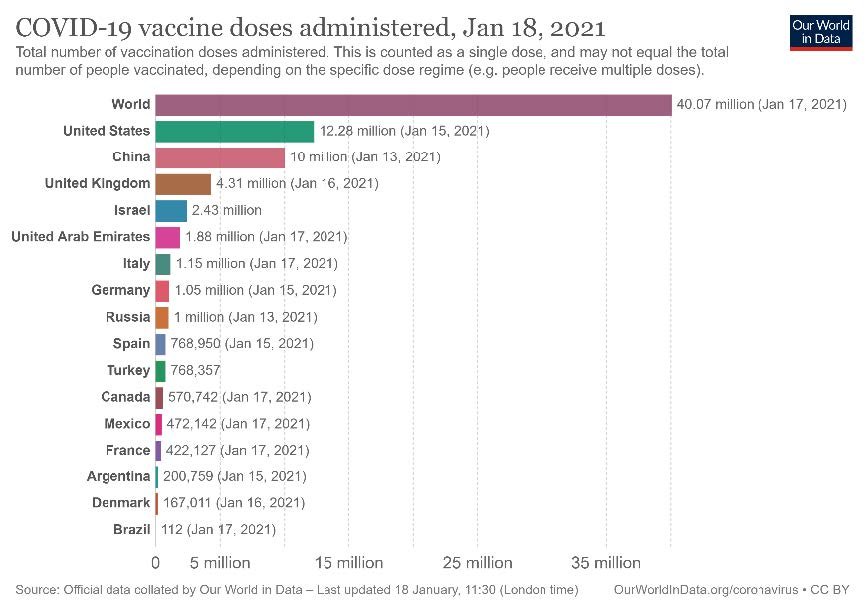 At the start of last week some 40 million plus vaccine doses had been administered. There is a long way to go but this is indeed fast progress that is being made.

Our analysis of borders shows only 4% are currently open, with major markets now requiring passengers to show negative tests before departure on both the outbound and return journey, as well as needing to quarantine. It is fair to say that whilst no one was under the illusion that demand in the 1st quarter would be strong, we probably did not expect further shrinkage of air routes and passenger volumes.

So, what does this mean for route development? There will be an understandable feeling of living in a holding pattern and questioning whether it is worth—as airlines, airports and tourism authorities—engaging in meaningful discussions about rebuilding air services when in truth we cannot be certain when our markets will truly open up. But summer is coming, the vaccine numbers in the chart above reflect only the early days, and societies are keen to open as fast as it is safe to do so.

Earlier this month I had the pleasure of moderating a discussion for the recent CAPA Live event. I was joined by Stephen King from Gatwick Airport and Simon Cox from easyJet. These types of discussion are always illuminating. However, for me, two sentiments stood out.

The first was about agility. The tone from that at the start of the pandemic impact had changed markedly. In those early days, everyone was operating in a crisis mode, yes making quick operational decisions, but without a sense of creativity and innovation. Both Stephen and Simon talked with an air that agility had become second nature, nothing was off the table. They understood that times are difficult but as both an airport and an airline they were much more adaptable, able to roll with the punches, scale and adjust their operations quickly and appropriately.

The second sentiment was a true confidence in passenger demand. Every positive signal to the industry, whether the announcement of vaccines or the potential opening of a travel corridor, was accompanied by strong and instant passenger searches with bookings following quickly when flights were available.

We have been concerned about the prevailing impact on demand due to our weakening economies. For now, though, it feels that for the leisure sector in particular, demand is pent-up, ready to go as soon as we are allowed.

For those whose role is route development, we should hold onto these sentiments, not just maintain our partner engagement but try to step it up further. The spring and summer are coming and every positive step we make now to be ready will truly pay dividends.