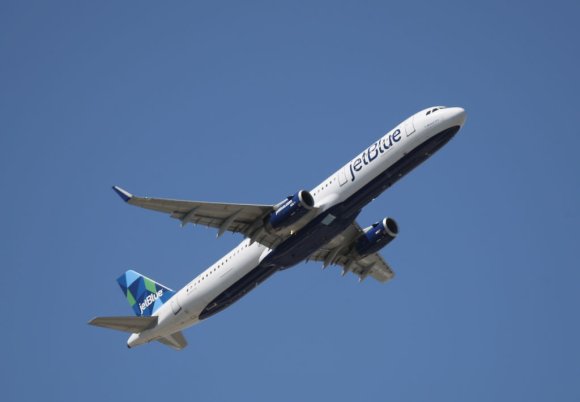 A second route from the carrier’s New York home to London Gatwick (LGW) will start in September, with both services to London operating daily on-board Airbus A321LRs. The single-aisle aircraft features 24 of the airline’s redesigned premium Mint suites.

“The pandemic has opened doors to London’s two busiest airports, and we look forward to bringing customers low fares and great service at both Heathrow and Gatwick,” CEO Robin Hayes said.

However, flights between Boston (BOS) and London—originally expected to launch later this year—have been pushed back to summer 2022.

JetBlue first announced its ambition to begin transatlantic flights in April 2019, saying growth into Europe was the “next natural step” in its focus city expansion strategy, with London being the largest destination not served by JetBlue from both New York and Boston.

Although the airline secured slots at LGW and London Stansted (STN) in late 2020, before gaining slots at LHR for the summer 2021 season in March 2021, it remained tight-lipped on its route plans until now.

Hayes claimed that the market between the two destinations has “suffered from outrageously high fares for far too long,” vowing to bring the cost down.

“Our low fares will disrupt the pricing of the major carriers and massive joint ventures,” he said. “When we launched Mint in 2014, we cut in half the cost of premium travel between New York and California, and now we’re ready to shake up the transatlantic market the same way.”

Hayes added that JetBlue would continue to work with the slot coordinators and the US and UK governments to “identify long-term pathways to continue serving Heathrow” so that it can carry on serving the UK’s largest airport beyond March 2022.

“We have an incredible opportunity to secure long term slots in London’s second-largest airport, and we look forward to building our presence there over the long-term,” Hayes said.

Details of JetBlue’s first transatlantic routes come as airlines and airports continue to push for the reopening of quarantine-free air travel between the US and the UK.

In an open letter to US Transportation Secretary Pete Buttigieg and British Transport Secretary Grant Shapps published earlier this month, a consortium of CEOs urged their governments to arrange a summit to “explore a path” to speed the reopening of the lucrative market.

A travel ban between the US and the UK has now been in place for 14 months, barring almost all non-American citizens who have recently been in the UK from entering the US.

Although the US recently lifted its blanket ban on the UK—moving the county out of the level four “do not travel” category to level three, which allows certain non-essential travel—the US has been placed on the UK’s amber list of countries, requiring arrivals to quarantine for 10 days alongside stringent testing.

OAG Schedules Analyser figures show that weekly capacity between the US and the UK is currently about 84,000 two-way seats—just 15% of the total available during the same week two years ago.