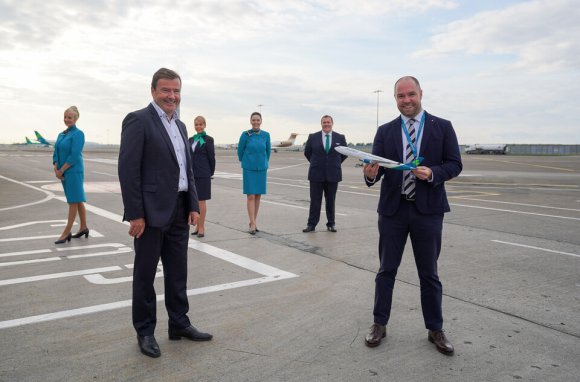 Aer Lingus has entered into a 10-year franchise agreement with startup Emerald Airlines to operate its regional network in the UK and Ireland.

The deal will commence on Jan. 1, 2023 although the two carriers said they would continue to “evaluate options with respect to an earlier contract start date.”

Aer Lingus Regional flights were previously operated by Stobart Air until its failure in June. At the time Stobart Air ceased trading, the carrier served 12 routes, including offering flights from Dublin (DUB) to Edinburgh (EDI) and Manchester (MAN).

Aer Lingus, which is owned by International Airlines Group, said the agreement with Emerald would support its Dublin hub strategy by providing connectivity of UK regional airports to North America via DUB.

Under the terms of the deal, Emerald will operate ATR turboprop aircraft on the regional routes with associated Aer Lingus branding and livery. More than 400 staff will be required between now and start of services.

“Aer Lingus’s strategic intent to develop Dublin Airport as a hub between Europe and the US, to deliver greater connectivity and aviation jobs, is significantly boosted by today’s announcement,” Aer Lingus CEO Lynne Embleton said.

Emerald was named in November 2020 as the preferred bidder to take over the Aer Lingus Regional franchise, but the contract has only just been signed off.

The startup has been founded by Conor McCarthy (pictured left), who has a 40-year career in the industry at the likes of AirAsia and Ryanair. He also previously acted as CEO of Aer Lingus Commuter and was the non-executive chairman of Stobart Air for a period between 2018 and 2019.

“The combined strengths of both airlines will allow us to offer optimised connectivity from popular cities and routes across Ireland, the UK and beyond,” McCarthy said. “Emerald Airlines have ambitious plans to grow and develop this partnership over the next few years with the first ATR aircraft joining shortly.”

Since the collapse of Stobart Air, Aer Lingus has stepped in to operate six Aer Lingus Regional routes until at least the end of March 2022. BA CityFlyer is also operating four of the routes for the rest of summer 2021 season.

Additionally, Ryanair has begun operating a 1X-daily flight between DUB and Kerry (KIR), with service set to increase to 2X-daily in September. Stobart Air had been running the state subsidised Public Service Obligation (PSO) route, but Ryanair’s flights will be on a commercial basis.