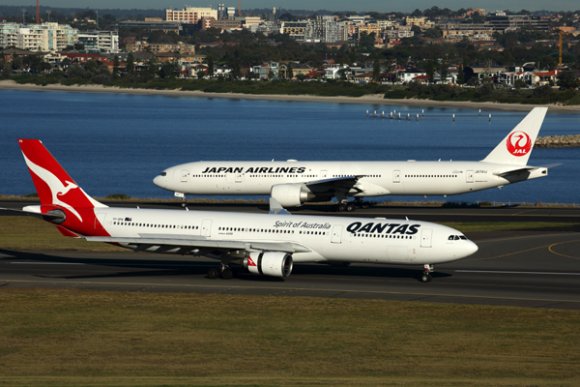 Australia’s competition regulator has denied authorization for Qantas Airways and Japan Airlines (JAL) to coordinate flights between Australia and Japan, saying the proposed joint business agreement would make it “very difficult” for other carriers to compete.

The Australian Competition and Consumer Commission (ACCC) concluded that the agreement would likely lead to reduced competition as international travel resumes, to the detriment of passengers.

The two oneworld alliance members had proposed an expanded codeshare relationship covering up to 29 destinations, as well as coordination of pricing, schedules, cargo, sales, tourism marketing and frequent flyer benefits. Qantas was also planning to launch a new route between Cairns and Tokyo.

However, ACCC chairman Rod Sims claimed the public benefits of the planned agreement would not have outweighed the potential harm to competition. Virgin Australia had told the ACCC that it would be more difficult to enter the Australia-Japan market if it is required to compete with Qantas and JAL acting jointly rather than as individual competing airlines.

“Airlines have been severely impacted by the pandemic and this has been a very difficult period for them,” Sims said. “But preserving competition between airlines is the key to the long-term recovery of the aviation and tourism sectors, once international travel restrictions are eased.”

In 2019, Qantas and JAL together flew about 85% of passengers traveling between Australia and Japan. They were each other’s closest competitors on the largest route, Sydney-Tokyo, and the only airlines operating on the second largest route, Melbourne-Tokyo.

When the two carriers put forward their alliance plans in December 2020, Qantas Group CEO Alan Joyce said it would be a “a win for our customers, a win for trade and a win for the one million people who work in tourism across Australia.”

The ACCC, which tentatively rejected the application in May, accepted that the joint business would result in the earlier reinstatement of Qantas and JAL’s capacity as traffic recovers following the pandemic. It also found that it would offer better connectivity of services, as well as stimulating tourism between Australia and Japan.

But the regulator concluded that granting the authorization would remove competition between Qantas and JAL, and make it very difficult for other airlines to operate on routes between Australia and Japan.

“We accepted that there was likely to be some short-term benefits from the alliance being able to jointly reinstate services more quickly when borders are reopened, which may initially stimulate tourism,” Sims said.

“However, the longer-term benefits of competition between airlines are cheaper flights and better services for consumers, which is vital to the recovery of tourism over the coming years.”

Sims added the ACCC believes Qantas could commence a new Cairns-Tokyo service without the alliance and the timing of any such service “would be best determined by commercial factors in a competitive environment.” Qantas subsidiary Jetstar’s services on this route are currently planned to start again from February 2022.

In a statement, Qantas and JAL expressed their disappointment at the ACCC’s decision. JAL executive officer Ross Leggett said the venture would have “accelerated the recovery” of business and leisure traffic, offering “clear economic and social benefits to both countries in the extremely challenging environment precipitated by the COVID-19 pandemic."

Qantas domestic and international CEO Andrew David added the airline disagreed with the regulator’s assessment that Cairns-Tokyo is viable without the joint business agreement.

“Without being able to coordinate with JAL, and in particular to draw Japanese tourists into northern Queensland using JAL’s extensive marketing reach in Japan, the planned flights between Cairns and Tokyo are just not commercially viable for Qantas,” he said.

“We explained that dynamic to the ACCC at length, and we disagree with their assessment that the route is viable without the alliance.”

Qantas currently hopes to restart international flights in December, targeting key markets like the UK, North America and parts of Asia that have high vaccination rates.