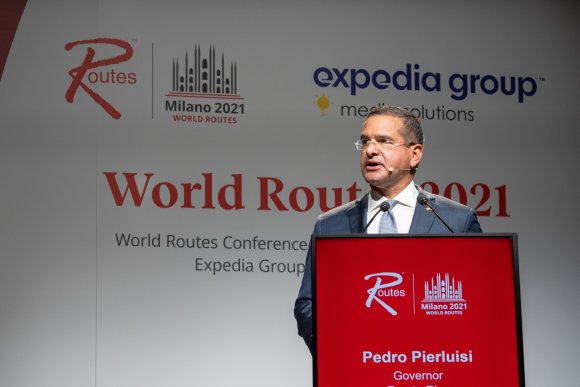 Puerto Rico’s Governor Pedro Pierluisi (pictured) was at World Routes 2021 on Oct. 10 to outline how the Caribbean island’s tourism strategy will position it for a sustained recovery.

He said the country’s economic issues in recent years have been compounded by natural disasters and the pandemic, but asserted that the island now has a “favorable business climate that fosters investment and job creation.”

Much of the focus is being placed on the island’s tourism industry, Pierluisi explained, which has become a “shining example of resiliency and recovery.”

He said Puerto Rico has recorded the highest-ever lodging revenues of $376 million so far in 2021, while the year-to-date lodging demand is 12% higher than its previous record in 2019.

The island continues to see strong demand from the US and Pierluisi outlined that new international territories are now a target. He cited Spain, the UK, Germany, Canada, Colombia, and Mexico.

“These specific markets have been chosen due to factors such as airlift and growth potential, as well as visitation numbers,” Pierluisi said.

He added: “This is an industry that will make us shine and show the world that the small island is strong and resilient. We have suffered from hurricanes, earthquakes and epidemics, and each time we came back stronger and better than before.”