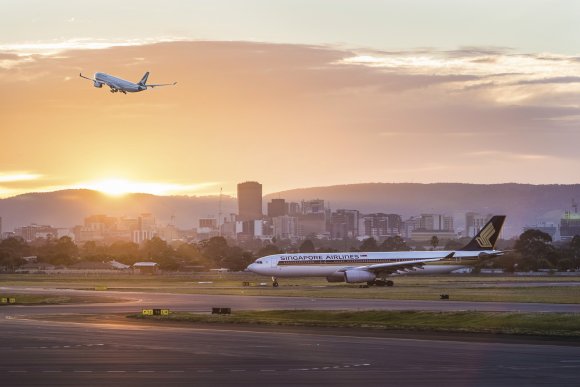 After 18 months of border closures and interstate travel restrictions, there is finally some light at the end of the tunnel for Australia’s aviation industry.

The country will reopen its international borders from November to fully vaccinated citizens and permanent residents, moving from a strict zero-COVID strategy to a model of living with the virus.

“When the trans-Tasman bubble opened earlier this year, we saw traffic recover strongly as there is a lot of pent-up demand. Whether it’s for leisure, business or to visit friends and family, people want to travel.”

Cheong said Adelaide has worked hard to maintain overseas connections to Auckland, Doha, Hong Kong and Singapore, supporting airline partners so that vital service would not be lost. Cargo has influenced this and will remain crucial as the recovery begins.

“South Australia produces a lot of commodities that are exported worldwide—we’ve therefore focused heavily on the cargo side of the business,” Cheong said.

“It will be a significant factor in flights being reinstated when borders do reopen. Passenger revenues are unlikely to rebound to pre-COVID levels right away, and so other sources of revenue will be important to the sustainability of routes.”

Cheong said Adelaide has also explored several international markets that were unserved or underserved before the pandemic where cargo could be a deciding factor.

“Japan is interesting as we export a lot of seafood there,” he said. “There’s potential to fill aircraft through leisure and VFR traffic, as well as education and business, that will support the cargo opportunity. That’s certainly a market we’re looking at in Asia.”

Adelaide is readying for the international restart in confident fashion after some domestic successes that have included capacity growth on trunk routes and the addition of new destinations to its network.

Qantas’ decision to station five 94-seat Embraer E190 aircraft at the airport as part of a three-year deal with Alliance Airlines has been a particular triumph. The base was secured with the support of the South Australian Government alongside Adelaide Airport.

Cheong described the move as “a huge win,” saying it will add almost one million seats to and from Adelaide each year, as well as new routes to the likes of Townsville, Cairns and Hobart.

He added that Adelaide, which hosted World Routes 2019, has also worked with Virgin Australia to target leisure markets in Queensland, the Northern Territory and Tasmania. Three new routes to Cairns, Darwin and Launceston started in September.

Additionally, Regional Express has entered the Adelaide-Melbourne market with double-daily flights, replacing lost capacity following the demise of Tigerair. The route was the carrier’s second capital city service to launch after Melbourne-Sydney.

However, Cheong pointed out that Adelaide has only focused on domestic markets that can be sustained once border restrictions are lifted.

“It’s important to get new capacity but we have to factor in how the domestic market will be affected once international borders reopen,” he said. “Our goal has therefore been to make sure that whatever new capacity we achieve, it is sustainable and here for the long-term.”