SunExpress is adding two new destinations in the UK to its network as part of plans to ramp up capacity to the country during the northern summer 2023 season.

The leisure airline, a joint venture between Turkish Airlines and Lufthansa, intends to open routes to both Bristol (BRS) and Newcastle (NCL) next year, increasing the number of points served in the UK and Ireland to eight. The expansion was announced at Routes Europe 2022 in Bergen, Norway.

The UK growth comes nine months after SunExpress launched a Request for Proposals (RFP) using Routes 360 which sought to find new strategic and long-term airport partners in the UK and Ireland.

Since issuing the RFP, the airline has opened routes from Antalya (AYT) to Birmingham (BHX) and Edinburgh (EDI) during the summer 2022 season.

Speaking at Routes Europe, SunExpress head of network planning and scheduling Wilken Bellmann said the airline hopes to increase capacity to the UK and Ireland by 89% during summer 2023, compared with summer 2022.

He added that the Turkish-German airline is also evaluation proposals from other potential airport partners identified during the RFP process and hopes to increase capacity to existing points served.

“Our strategic vision is to have a daily flight from all of these airports,” Bellmann said. “The plan for next summer is to increase the frequency on the existing routes, so Manchester will be increased to double-daily for example.

“From Edinburgh and Birmingham we will also add Izmir and Dalaman—that will help to fill the whitespots on the map and means the UK is perfectly covered.” 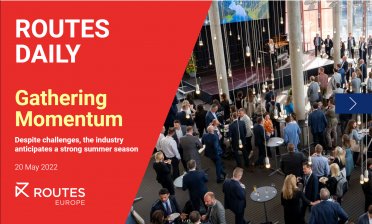 Read all the latest news, insight and analysis from Routes Europe 2022 inside the Routes Daily magazine.

According to data provided by OAG Schedules Analyser, SunExpress will offer 11 routes to the UK and Ireland by peak summer 2022, offering some 16,700 two-way weekly seats. This compares with six routes and 3,400 weekly seats during peak summer 2019.

SunExpress reported a profit of €59 million ($62 million) in 2021 and momentum has continued into this year, with the carrier launching 25 new routes during the 2022 summer season.

Speaking to Routes earlier this month, CEO Max Kownatzki said the carrier handled 6 million passengers in 2021 and expects that to grow by a further 4 million this year.

“That has enabled us to announce a significant network expansion with 25 new routes and 16,250 additional frequencies in the summer 2022. If I had more aircraft and staff available, I would be using them.”