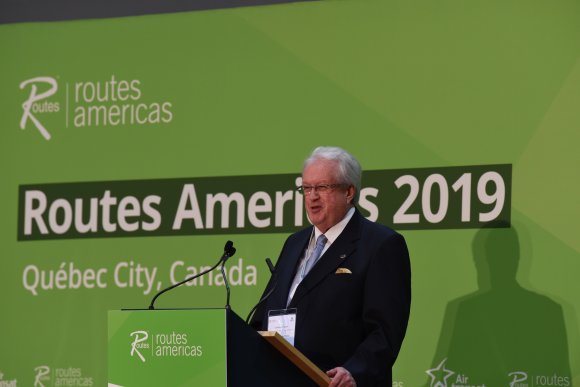 Gaëtan Gagné, the president and chief executive of Québec City Jean Lesage International Airport (YQB), has hailed the success of Routes Americas 2019, which took place in the Canadian city from 12- 14 February.

“Being able to host Routes Americas has boosted the reputation of YQB and the Québec City area,” he said.

“YQB is one of the fastest-growing airports in Canada. This year alone, we experienced a 6.2 percent increase in passenger traffic. Over the past several years, we made investments to transform our airport, develop world-class facilities and double our passenger capacity.”

By the end of the conference, YQB had already signed a tentative agreement with the low-cost start-up Canada Jetlines and strengthened its business and trust relationships with airlines from around the world.

Read our live blog from the event, featuring all the news, key quotes and images.

The 12th Routes Americas attracted hundreds of key decision makers from airlines, airports and tourism organisations from across the Americas. Keynote speakers included Javier Suarez, the chief executive of Jetlines, and Steven Greenway, the president of Swoop.

Gagné added: “We are known for our exceptional passenger experience, and are ready to face global traffic that is expected to double in the next 15 years. We are also excited to begin the next step in our growth: building a US Customs pre-clearance area, a project supported by many airlines.”

Geneviève Guilbault, honorary president of the event, deputy premier of Québec, Minister of Public Security and Minister responsible for the Capitale-Nationale region, stated in her speech that “a pre-clearance centre will inevitably benefit the region’s tourism and economic development”.

She added: “It will be a true asset to the growth of our companies, to our exports and to our passengers travelling directly to the United States.”

Steven Small, brand director of Routes, praised YQB for hosting such a successful event. “We arrived in Québec City at a key moment for our hosts,” he said.

“YQB has made huge investments in its infrastructure and is contributing to the success of a region that is experiencing exceptional economic growth. More than ever, YQB is ready to handle growing passenger traffic and welcome new air routes.”

Routes Americas 2020 will take place in Indianapolis, Indiana, from 4-6 February 2020. It will be hosted by the Indiana Economic Development Corporation, the Indianapolis Airport Authority, and Visit Indy, the city’s tourist board.