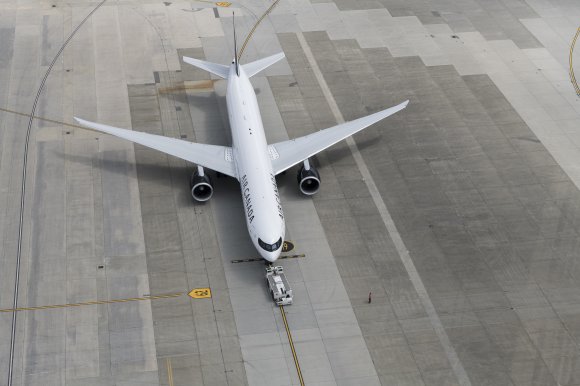 Air Canada will reduce capacity by 85-90% during the second quarter 2020 compared with the same period last year as it grapples with the “unprecedented impact” of the COVID-19 pandemic on its business.

According to data from OAG Schedules Analyser, Canada’s flag carrier originally planned to offer more than 16 million departure seats during Q2 across 418 routes. A total of 7.4 million seats were scheduled for the domestic market and 8.6 million on international flights.

The planned 85-90% capacity reduction during Q2 2020 means the Star Alliance member is likely to operate fewer than 2.5 million seats during the three-month period.

In a statement, Air Canada said that subject to further government restrictions, it intends to continue to serve a small number of international and US transborder destinations from “select” Canadian cities from April 1, in addition to a reduced domestic network. The latest update from Airlineroute suggests the airline will fly 13 international and 26 transborder routes.

Air Canada will also operate international flights in collaboration with the Canadian government to repatriate Canadians who are abroad, as well as cargo-only flights to ensure the continued movement of essential goods, including medical supplies.

The capacity reduction was announced as the airline confirmed plans to temporarily lay off 16,500 employees early next month. It will place 15,200 members of its unionized workforce on “off duty status” and furlough about 1,300 managers for a two-month period.

“To furlough such a large proportion of our employees is an extremely painful decision but one we are required to take given our dramatically smaller operations for the next while. It will help ensure that Air Canada can manage through this crisis that is affecting airlines everywhere.”

Other measures include a companywide cost reduction and capital deferral program, which is targeting savings of at least C$500 million ($354 million). For additional liquidity, the carrier has also drawn down operating lines of credit worth roughly $1 billion.

On Friday (March 27), Canada’s Competition Bureau said it has “competition concerns” about the planned takeover of Transat by Air Canada. The watchdog said the deal “is likely to result in a substantial lessening or prevention of competition in the sale of air travel or vacation packages to Canadians.”

The antitrust agency added: “Eliminating the rivalry between these airlines would result in increased prices, less choice, decreases in service and a significant reduction in travel by Canadians on a variety of routes where their existing networks overlap.”

Based on data before the COVID-19 pandemic, the Competition Bureau noted that there are 83 overlapping routes between the two carriers, 49 of which are between Canada and Europe. The transaction would give Air Canada a monopoly on 22 of the 83 routes, the investigation found.

The Competition Bureau’s findings hold no legal weight but will be considered by Transport Canada, which is conducting its own review into the merger.