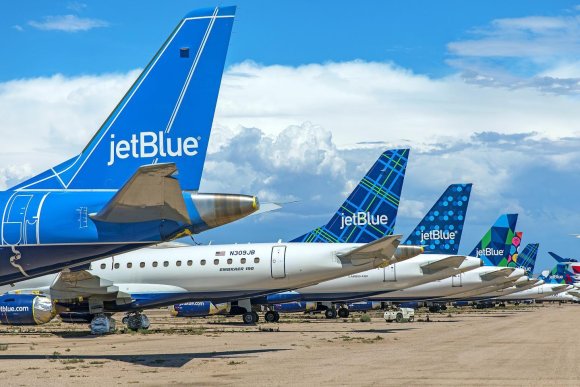 New York (JFK)-based JetBlue Airways said it will push ahead with a planned codeshare partnership with Dallas/Fort Worth (DFW)-based American Airlines, even after its unionized pilots rejected a tentative agreement viewed as key to implementing the alliance.

The codeshare partnership between JetBlue and American—dubbed the Northeast Alliance—was approved by the US Transportation Department (DOT) in January. Originally announced in July 2020, the partners say the alliance will enable them to codeshare and coordinate schedules at congested Boston and New York airports.

That plan was called into question on Feb. 16, however, after JetBlue’s pilots—represented by the Air Line Pilots Association (ALPA)—narrowly voted to reject a tentative deal that would have provided contractual scope clause relief over 10 years in exchange for a pay increase and additional job protections. The deal was rejected by a 54-46 margin, with 92% of eligible pilots voting.

“If JetBlue wants this full partnership with American to be implemented and successful, they will need the pilots to be part of it,” Kenney said. “To do that, management must show the same level of commitment to its pilots with contractual assurances that protect our jobs and provide meaningful career improvements. We stand ready to work toward an acceptable resolution of these issues.”

A spokesman for JetBlue called the result of the vote “disappointing,” adding that management plans to proceed with implementing the codeshare regardless of its lack of agreement with pilots on scope clause relief.

“We are committed to our alliance with American Airlines and plan to move forward so we can deliver its benefits to both crewmembers and customers,” JetBlue spokesman Derek Dombrowski said. “The alliance allows JetBlue to grow in the northeast with new routes and destinations, getting our crewmembers flying again as we recover from the impact of coronavirus.”

In response to JetBlue’s decision to push ahead with the codeshare, ALPA told pilots that it will seek a solution to the dispute through arbitration after the carrier “announced its intentions to implement the commercial agreement in violation” of the terms of pilots’ 2018 collective bargaining agreement.

Allied Pilots Association (APA) spokesman Dennis Tajer said American Airlines pilots also have concerns about whether the codeshare deal will lead to increased flying for the company’s mainline pilots. Unlike JetBlue, however, Tajer said American’s pilots lack any contractual leverage to hold up the deal’s implementation.

“This deal may add to the bottom line of American Airlines, but in cases like this, the company’s success does not necessarily make a difference to the bottom line of our pilots,” Tajer said. “That’s why we’re cautious, because we’ve been burned too many times in the past. Maybe this time will be different, but our history says it either makes no difference for mainline pilot jobs, or it harms us.”