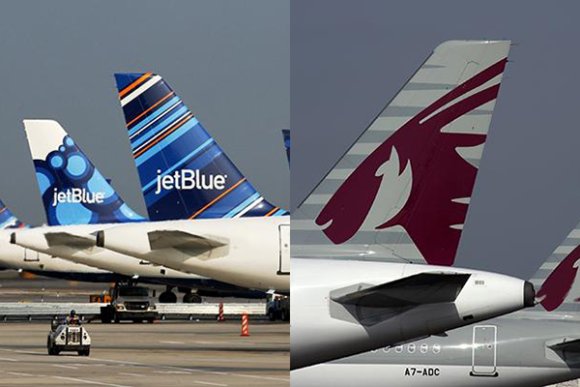 New York's JetBlue Airways and Qatar Airways have announced plans to expand their existing codeshare partnership, offering customers more connecting options on flights between the US, Africa and Asia.

The carriers will also link their loyalty programs—JetBlue’s TrueBlue and Qatar’s Privilege Club—to  allow members to begin accruing miles later this year. The companies said those benefits will expand to allow for points to be redeemed on either airline’s flights “in the future.”

“JetBlue and Qatar Airways lead the industry with our award-winning service and exceptional inflight experiences, which is why our partnership has been such a great success for the past decade,” JetBlue revenue chief Scott Laurence said. “Now, with an expanded codeshare covering nearly a dozen major US gateways or connecting points, even more travelers can enjoy a seamless global travel experience between our airlines.”

JetBlue is not the only US carrier partnered with Qatar. Late last year, the Gulf carrier announced a codeshare partnership with Alaska Airlines out of Seattle (SEA), ahead of Alaska’s entry into the oneworld alliance this March. As part of that agreement, the two carriers also launched a frequent-flier partnership that went live March 31.

Qatar also launched a strategic partnership with fellow oneworld member American Airlines in February 2020, which allows its passengers to connect onward to more than 200 destinations in American’s network. Both Alaska and JetBlue also launched codeshare partnerships with American last year.