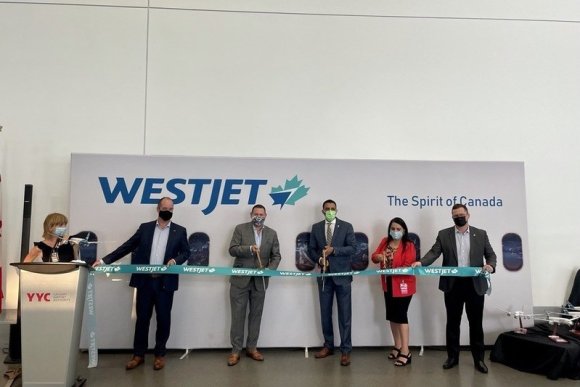 WestJet has started flying between Calgary (YYC) and Amsterdam (AMS). The route is the Canadian carrier’s first new service to Europe in more than 18 months. Flights are initially operating twice a week using Boeing 787-9 aircraft, increasing to 3X-weekly from Sept. 9. “This route between Calgary and Amsterdam provides greater access between Canada and European destinations for travellers on both sides of the Atlantic and is strengthening travel and tourism ties between our two countries,” WestJet CCO John Weatherill said. In Late July, WestJet signed a codeshare agreement with KLM to place its WS code on flights operated by KLM to 18 European cities.

India’s Go First has opened three routes to Qatar from Aug. 5. The airline, previously known as GoAir, is flying to Doha (DOH) from Kannur (CNN), Kochi (COK) and Mumbai (BOM). Service from BOM is 4X-weekly, while two flights per week are scheduled from CNN and COK. “Qatar and India have always shared a special bond that is built on friendship, business and diplomacy," Go First CEO Kaushik Khona said. “I believe Go First’s new flights to Doha will fulfill the aspirations of job seekers as well as business travelers to leverage Qatar's burgeoning economy.”

Two new routes to the Canary Islands are being launched by SAS Scandinavian Airlines from late October, increasing the number of services to the Spanish archipelago to six. Nonstop flights from Stockholm Arlanda (ARN) to Tenerife South (TFS) will begin on Oct. 30, with a Gothenburg Landvetter (GOT)-Las Palmas (LPA) service launching on the same day. Both routes will receive one flight per week.

Emirates has announced it is restarting services to Glasgow (GLA) in the UK, with 4X-weekly flights from Aug. 11. The route from Dubai (DXB) will be operated using Boeing 777-200LR in a two-class configuration. From September, Emirates will increase its flight frequency to a daily service.

Romania’s Blue Air has announced plans to begin flying between Iasi (IAS) and Dublin (DUB). Flights will initially be 2X-weekly on Wednesdays and Sundays from Dec. 19. A third weekly frequency is planned from June 22, 2022. The network addition comes ahead of Blue Air opening a base at IAS for the summer 2022 season.

Wizz Air UK has restarted operations from Doncaster Sheffield (DSA) in the UK, offering flights to Alicante (ALC), Burgas (BOJ), Košice (KSC) and Poznan (POZ). Service to the Spanish port of Alicante will be 2X-weekly in August and September, rising to 3X-weekly in October. Poznan in Poland and the Slovakian city Košice will be 2X-weekly and 3X-weekly respectively, while flights to Burgas on Bulgaria’s Black Sea coast will be once a week.

United Airlines is adding 74 flights from September through November as it seeks to capture traffic from fans traveling to American football games. The special routes will connect college towns and professional football markets. For key college football games, the carrier plans to operate 58 point-to-point flights, including service between Austin in Texas and Bentonville in Arizona to support the match between the University of Texas and the University of Arkansas. Sixteen direct flights will also be added for four professional football matches, including Green Bay and New Orleans for the Packers versus the Saints on Sept. 12.

Air Canada has resumed three transatlantic routes. From Toronto Pearson (YYZ), service has restarted to Dublin (DUB) and Zurich (ZRH), each of which are 3X-weekly. A 3X-weekly route between Montreal (YUL) and London Heathrow (LHR) has also returned to the Star Alliance member’s network.