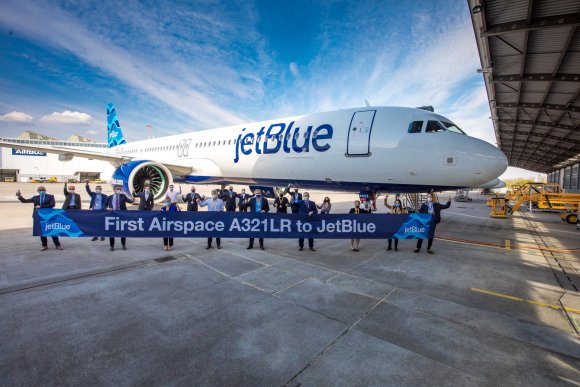 JetBlue Airways will make its long-awaited entry into the transatlantic market on Aug. 11, launching its inaugural service between New York and London.

JetBlue first announced its ambition to begin transatlantic flights in April 2019, saying growth into Europe was the “next natural step” in its focus city expansion strategy, with London being the largest destination not served by JetBlue from both New York and Boston. JetBlue CEO Robin Hayes claimed that the US-UK market has “suffered from outrageously high fares for far too long,” vowing to bring the cost down.

“Our low fares will disrupt the pricing of the major carriers and massive joint ventures,” he said in May 2021. “When we launched Mint in 2014, we cut in half the cost of premium travel between New York and California, and now we’re ready to shake up the transatlantic market the same way.”

Although JFK-LHR will launch with daily service, the latest schedules show the number of flights will be cut to 4X-weekly from Sept. 2 through Sept. 30, with Hayes blaming ongoing restrictions between the US and the UK for the reduction. Despite this, a second route to the UK, between JFK and London Gatwick (LGW), is still scheduled to begin on Sept. 29.

The launch of the two London routes sees JetBlue attempt to take share from the legacy carriers which dominate the market. The airline hopes its lower cost business class product will tempt corporate travelers, as well as attracting the price-conscious segment in the back of the cabin.

Norwegian had been a disruptive force in this market before the pandemic using Boeing 787s, carving out a niche in finding big point-to-point sectors with room to grow and stimulate new traffic, as well as targeting unserved routes to secondary cites. However, the LCC confirmed its withdrawal in January as part of a wider restructuring to focus on its short-haul operations.

Since the onset of the COVID-19 crisis and the associated travel restrictions that came into force in March 2020, capacity between the US and the UK has remained low. There were fewer than 170,000 two-way monthly seats offered between the countries at the lowest point in May 2020—down by almost 94% on May 2019.

Although capacity has been gradually recovering since reaching the nadir, July 2021’s figure of 508,742 two-way seats still represents a drop of 80% on the same month two years earlier when 10 carriers collectively provided in excess of 2.5 million seats.

Looking at the data by airline shows that transatlantic joint venture partners British Airways and American Airlines had the largest capacity share on US-UK routes in 2020, accounting for 38% and 17.7% respectively of the total number of seats available.

While capacity on US-UK routes remains about 20% of the total two years ago, the launch of JetBlue’s first London service comes as travel restrictions between the US and UK are beginning to ease—and capacity is returning to the market as a result.

From Aug. 2, the UK government began allowing entry to fully vaccinated passengers arriving in England from the US without the need for quarantine.

Although the move has not yet been reciprocated by leaders in the US—meaning it is not possible for most British nationals to enter the US if they have been in the UK, Ireland or any Schengen area within the previous 14 days—airlines are responding by increasing frequencies to existing services.

The move sees United’s capacity between the US and London grow to 19,712 two-way weekly seats—a rise of 13.1% on its previous schedule. Additionally, United said it “looks forward to resuming additional London service” in the coming months, as well as launching new nonstop service between Boston (BOS) and LHR.

The Star Alliance member announced in February plans to connect BOS and LHR, offering daily flights onboard Boeing 767-300ER aircraft. However, the airline is yet to confirm a start date.

BA and Virgin Atlantic have also reacted to the loosening of travel restrictions in recent weeks. OAG data reveals that BA intends to increase capacity from 36,940 two-way US-UK seats this week (w/c Aug. 9, 2021) to around 69,824 by the end of the month. Virgin Atlantic is also upping capacity from 19,230 weekly seats to about 67,472 over the same time period.

According to findings published by OAG in August 2019, JFK-LHR led the way as the most lucrative air route in the world prior to the pandemic. The analysis found British Airways was the only carrier to operate a route that generated more than $1 billion between April 2018 and March 2019, earning the airline $1,159,126,794 during the period.

About 31% of BA capacity on the route was either first or business class seats, demonstrating the importance of high-yielding passengers.

Alongside JetBlue, the market between the US and UK is set to gain another new entrant later this year when Aer Lingus begins transatlantic service from Manchester (MAN).

The Irish carrier intended to commence flights to JFK and Orlando (MCO) from July 29 but has pushed back the start date to Sept. 30. The MAN-JFK service will be daily using Airbus A321LRs, while MAN-MCO will be 5X-weekly on board A330-300s.

Aer Lingus (U.K.) Ltd has been set up to fly the routes, but the flights will operate under the Aer Lingus name and have the EI designator code. The UK Civil Aviation Authority gave the airline permission to operate US services on Aug. 10.