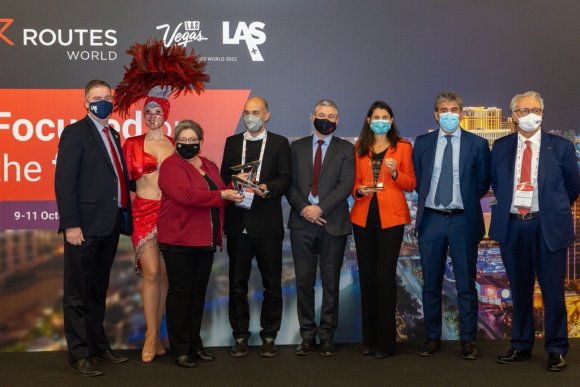 As the 2021 edition of the event drew to a close, SEA Milan Airports handed over the hosting responsibilities of the event to Las Vegas Convention and Visitors Authority and McCarran International Airport.

Having hosted the 2013 edition of the event, the LVCVA and McCarran International Airport will again welcome the global route development community to the city that has been named the No. 1 Trade Show Destination for 26 consecutive years.

The aviation industry is an integral part of economies across the globe and, in Las Vegas, McCarran International Airport serves as an economic engine that powers the city’s tourism industry. In 2019, the total economic impact of the industry for the city surpassed $63bn.

By continuing significant development projects throughout the pandemic, including the expansion of the Las Vegas Convention Center and the construction of three new resorts that added more than 6,000 new hotel rooms to the destination, Las Vegas has ensured it is poised to capitalise on the new opportunities created as a result of the Covid-19 pandemic.

By consistently uniting decision-makers from the global route development community, Routes World has made a real impact on the world's air services - over half of the world’s new routes are connected to meetings at the event. VPs and Heads of Network Planning from 250 of the world's leading carriers are expected to attend the event in Las Vegas.

Speaking at the handover ceremony, Steven Small, director of Routes, said: “We are delighted to return to Las Vegas for Routes World. As a destination that is synonymous with business and investing in the future, Las Vegas will be the ideal location to unite the aviation decision makers that will define the world’s air services.”

“Las Vegas and the airline industry have navigated steep and unexpected challenges over the last 18 months,” said Steve Hill, president/CEO of the Las Vegas Convention and Visitors Authority. “By welcoming Routes World back in 2022, we are looking toward the continued recovery and future growth of the meetings, tourism and aviation industries. As a global business destination that relies heavily on airline connectivity, we look forward to hosting the aviation world’s decision makers as they continue their mission to develop convenient and efficient air service.”

“It is an honor to once again serve as the host airport for Routes World,” said Rosemary Vassiliadis, Clark County Director of Aviation. “After so many trying and tumultuous days and nights in this pandemic, it is more important than ever for the world’s aviation leaders to come together and plan our industry’s path forward. While there are still challenges ahead, this will be an extraordinary opportunity to reconvene with old partners and forge new connections that will reignite and expand global travel.”