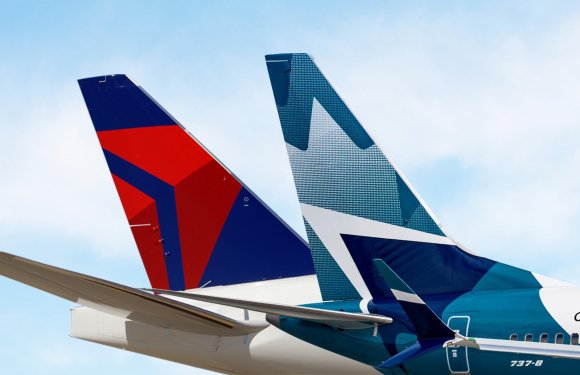 Canadian LCC WestJet will refile its application to the US Transportation Department (DOT) to be allowed to enter a joint venture (JV) with Delta Air Lines, WestJet CEO Ed Sims says.

DOT tentatively approved the JV application in October 2020, but applied a number of conditions, including taking WestJet’s ULCC subsidiary, Swoop, out of the JV and divesting 16 takeoff and landing slots at New York LaGuardia Airport (LGA). The airlines withdrew their application in November 2020, describing the conditions, especially the slots divestiture requirement, as “unreasonable and unacceptable.”

As guest speaker on an International Aviation Club of Washington webinar July 22, Sims said WestJet remained fully committed to the JV and believed Delta was similarly committed, so they will revise and refile their application.

“You have to take a stand” when DOT rules as it did on a slot-constrained airport like LaGuardia, Sims said, adding that he and Delta CEO Ed Bastian “think very similarly ... and are not fans of big government.”

Sims, who has announced he will step down at the end of 2021 after four years as EVP, commercial, then CEO at WestJet, did not give a time line. But he did say WestJet was looking forward to ultimately expanding the Delta relationship into the transatlantic market via Delta’s SkyTeam alliance partners Air France and KLM.

Sims said WestJet’s costs were cut 72% in response to the pandemic and a drastic drop in demand for air travel. Unlike the US and many European countries, the Canadian government was reluctant to provide sector-specific aid to industries, a policy that has changed recently but extends only to payrolls support and potential access to loans as opposed to grants. Sims said he did not believe that debt was the solution to climb out of the demand shortfall. “The wage support is greatly appreciated, but I’m not a believer in a complex debt structure or feel that’s the best use of the public purse,” Sims said.

Canada’s strict and lengthy lockdown and travel restrictions, cutting off international access and some inter-province travel, forced some carriers to suspend operations. WestJet maintained minimum services throughout but had to cut costs by while still losing money “on every single seat” at the lowest point, Sims said.

“I’d love to think that the majority of [those cost cuts] is permanent,” Sims said, explaining that WestJet has a 35%-40% cost advantage over its closest competitor, allowing it to discount fares by similar amounts. “So we will keep the core of that.”

But Sims noted that Canada’s privately owned air traffic control system provider, NavCanada, and some Canadian airports have looked to recoup their losses through significant fee hikes. NavCanada is increasing its fees by 29.5% and Winnipeg Airport (YWG) has introduced a 52% fee hike, Sims said. After the government elections in fall 2021, WestJet will be asking for regulatory reform with regards to ATC and airport charges.

The past eight weeks, as restrictions have started to lift, “have been spectacular” in terms of bookings and demand, Sims said, and will further improve when Canada reopens its border to fully vaccinated Americans and Canadian citizens in August, with a similar policy for all visitors in September.