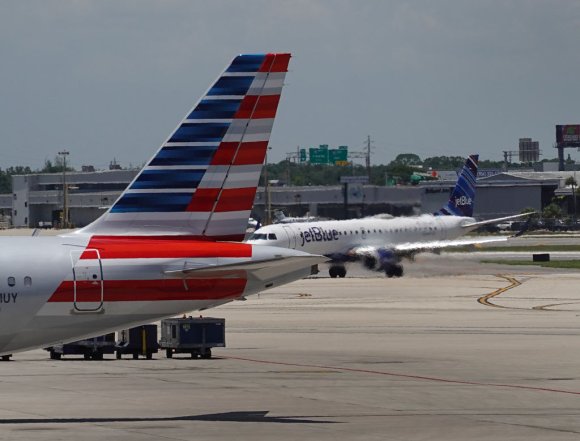 The US Justice Department (DOJ) and six states have filed an antitrust lawsuit against American Airlines and JetBlue Airways seeking to end their Northeast Alliance (NEA), alleging the tie-up threatens competition in domestic and transatlantic markets.

The carriers claim the alliance has already brought 58 new routes, increased frequencies on more than 130 routes and codesharing on 175 routes, as well as new international flights to Athens, Delhi and Tel Aviv.

However, there have been growing calls for a review of the US Transportation Department’s decision to approve the NEA. The likes of Spirit Airlines and Eastern Airlines have urged a public interest review to assess the competitive merits of the arrangement.

What action has the DOJ taken?

The DOJ—together with attorneys general in Arizona, California, Florida, Massachusetts, Pennsylvania, Virginia and the District of Columbia—filed a lawsuit in the District of Massachusetts on Sept. 21 to block what it claims is an “unprecedented series of agreements” between American and JetBlue.

The civil antitrust complaint alleges that the pact will “eliminate important competition” in Boston and New York, as well as “significantly diminishing” JetBlue’s incentive to compete with American elsewhere. It also sets out why the alliance will result in “higher fares, fewer choices, and lower quality service” if allowed to continue.

The DOJ argues the NEA has created a “de facto merger” between Dallas-Fort Worth-based American and New York’s JetBlue in domestic markets that have either Boston or JFK/LaGuardia as an endpoint.

What allegations have been made?

Among the claims listed in the 42-page document is the DOJ's view that the NEA would “cause significant and wide-ranging harms to consumers across the country.”

In Boston, the DOJ highlights that both American and JetBlue had each vowed to continue growing their presence in the city before the pandemic. According to OAG data, JetBlue was the largest carrier from BOS in 2019, commanding a 29.1% share of all departure seats. American was the third largest with a 15% capacity share, behind Delta Air Lines on 19.3%.

The complaint alleges that the NEA serves to eliminate that increasing competition. “When JetBlue was developing a joint flight schedule with American in April 2020, it identified as a strategic goal driving higher margins in markets between Boston and American hubs,” the DOJ document states.

In New York, the complaint acknowledged that JetBlue’s Mint business-class product has pressured other airlines to reduce fares and improve quality, citing transcon routes like JFK-Los Angeles (LAX) as an example.

However, DOJ alleges that JetBlue would increase fares on routes where competition with American is removed. The DOJ highlights JetBlue’s decision to raise prices between JFK and San Diego (SAN) in 2019 after American suspended service. “The elimination of competition between American and JetBlue after the [NEA] will similarly lead to higher prices and worse service for consumers,” the document says.

Elsewhere, the complaint argues that because JetBlue will share revenues that American earns on transatlantic service to and from Boston and New York, it will have less incentive to compete aggressively with American in those markets, whether by lowering fares or improving service.

The DOJ adds that the alliance is “particularly likely” to lead to a reduction in capacity at American’s Philadelphia (PHL) hub; dampen competition in 98 markets where no airline provides nonstop service, but where American and JetBlue provide competing connecting service; and make JetBlue less likely to pursue partnerships with other smaller carriers.

Overall, the DOJ says that because the NEA aligns the interests of JetBlue with American, this limits JetBlue’s “ability and incentive to remain an independent and disruptive force,” meaning it is less likely to add capacity, lower fares, or enter routes where it would compete with American. In turn, the complaint alleges that the pact would cause American to “pull its competitive punches against JetBlue in order to maintain a good relationship.”

How have American and JetBlue responded?

American chairman and CEO Doug Parker has hit back by saying the NEA has created a “third, full-scale competitor” to Delta and United Airlines in New York and is “empowering more growth” in Boston.

“Ironically, the Department of Justice’s lawsuit seeks to take away consumer choice and inhibit competition, not encourage it,” he said. “This is not a merger: American and JetBlue are—and will remain—independent airlines.”

In a message to staff, JetBlue CEO Robin Hayes stressed that the carrier’s “commitment to competition and low fares remains as strong as ever.

“While we have built a successful business in both New York and Boston, our runway for growth in the Northeast to challenge global legacy carriers Delta and United is limited,” he said.

“And I’m sad to say that our biggest obstacle to bringing more low fares and great service to the Northeast right now is the DOJ—the very government agency that should be making every effort to foster robust competition among airlines.”

Hayes said that the DOJ is “sure to face an uphill battle opposing the expansion of low fares in New York and Boston.” He pointed out that American and JetBlue have added 58 new routes, including 18 international flights that will be launched by 2022, and increased frequencies on more than 130 routes. The carriers are also codesharing on 175 routes.

“We have tried, and failed, for many years to gain additional slots so that we can add flights and competition,” Hayes said.

“Without more slots and access available to us, we developed a creative way to grow into a stronger competitor to United and Delta in these very congested markets, while retaining our independence and competing with the same fierceness against American in other markets.”