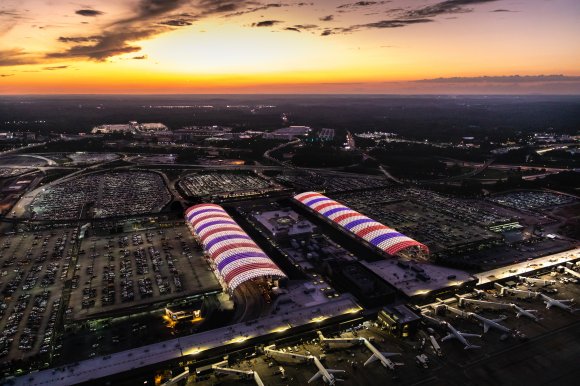 Capacity across North America totaled 5.3 million seats last week (w/c May 11), a 1.3% decline compared with the previous seven days. Year-on-year, there were 19 million fewer departure seats in the North American market last week, compared with a year ago. However, the latest data from OAG suggests the bottom of the market could have been reached, with the number of scheduled departure seats this week set to increase to around 5.6 million.

In the US, there were 5.06 million seats last week—down from 5.12 million the previous week. The figure was enough to maintain the country’s position as the world’s second-largest aviation market but means capacity in the US now trails China by more than 6 million departure seats. The below infographic charts the US and China’s weekly scheduled airline capacity changes since the beginning of the year.

Dallas/Fort Worth (DFW) remained the largest airport by departure seats in North America last week with 284,567 on offer, down 5.7% on the previous seven days. Atlanta Hartsfield-Jackson (ATL) was second on 243,124 seats, a marginal reduction of 0.5% week-on-week, while Denver (DEN) was third on 228,306 seats, down 2%.

Since the beginning of March, ATL has lost the greatest number of departure seats in numerical terms of all airports in North America. The OAG figures show there were 927,511 fewer departure seats last week than during w/c March 2. That equates to a 79.2% reduction.

Southwest Airlines remained the largest carrier in North America by capacity last week, offering 1.45 million seats across 9,525 flights. The capacity figure meant the Dallas-based airline was responsible for more than a quarter of all available seats across the continent.

The below infographic shows the 10 largest North American carriers by capacity during w/c May 13, 2019, compared with last week. Of the 10, Delta’s capacity has reduced the most in numerical terms, shrinking by 3.99 million seats. American is close behind, having lost 3.91 million, while United Airlines’ capacity has dropped by 3.27 million.

Delta Air Lines is this week resuming two passenger services to Frankfurt (FRA) and London Heathrow (LHR) for the first time since flights were suspended because of the COVID-19 pandemic.

The SkyTeam alliance member said the demand for cargo is driving the return of the routes although the flights will be available for passengers. Service to FRA and LHR will operate 3X-weekly from ATL and Detroit (DTW) respectively from May 21.

“Keeping global supply chains open is more important now than ever and these new services will enable suppliers to meet the needs of their customers,” Delta Cargo vice president Shawn Cole said.

“We’re receiving daily requests for shipments of medical supplies as well as goods that keep businesses in operation. By also opening these services to passengers, we can facilitate essential travel between the UK, Europe and United States.”

Delta NS20 Long-Haul Inventory update as of 14MAY20

United May/June 2020 Los Angeles operations as of 10MAY20