Flamenco Time at Ireland West Knock as the airport celebrates historic day with the launch of a new twice weekly scheduled service to Alicante with Ryanair! 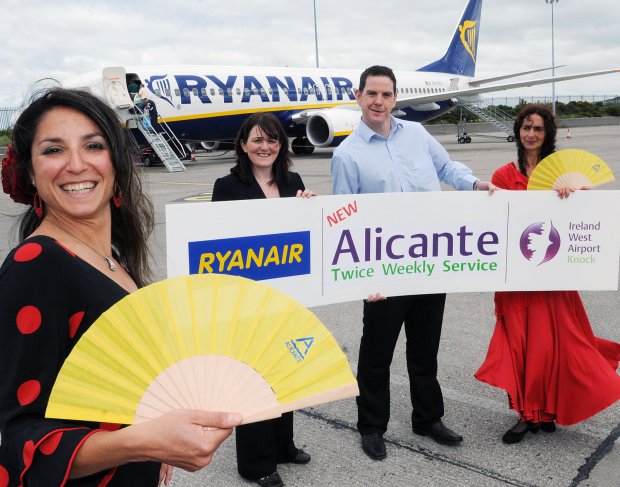 Flamenco Time at Ireland West Knock as the airport celebrates historic day with the launch of a new twice weekly scheduled service to Alicante with Ryanair!

Ireland West Airport Knock today, Friday 5th June, launches its first ever scheduled flights, to a European destination, outside of UK, as Ryanair commences a twice weekly service direct to Alicante International Airport in Southern Spain. The introduction of Alicante now brings to 10 the number of scheduled destinations available at Ireland West Knock and compliments its additional network of 10 European holiday destinations. This latest expansion at Ireland West Knock will generate an estimated 12,000 additional annual passengers at the Airport this summer.

Commenting on the start of the new route Lesley Kane, Head of Sales &
Marketing at Ryanair said: "Europe's largest low fares airline is pleased to welcome passengers onboard our new twice weekly service from Ireland West Airport Knock to Alicante on the Costa Blanca. At last, residents living in the West and North West of Ireland have access to the lowest fares, guaranteed when travelling to Spain. This new low fares service will operate until the end of October and will generate an additional 12,000 passengers through the airport this summer.
To celebrate this new route launch Ryanair is releasing 5,000 seats on flights from Ireland West Airport Knock to Alicante from €35* for travel in June, July, September and October. Since seats at these crazy low prices will be snapped up quickly, we urge passengers to book them immediately on www.ryanair.com."

Liam Scollan, Chairman of Ireland West Airport Knock, welcomed Ryanair's latest expansion saying:  "This new service to Alicante is the first ever low cost, seat-only service to a major European tourist destination from Ireland West Airport Knock.  There will be less and less need for people from the West and North West to take the long trek to Dublin when there is such a convenience as Ireland West Airport Knock on their doorstep in the West of Ireland.  Whether you are in Donegal, Longford or Galway, you can now literally leave your home at 10:00am and be in Alicante at 5.00pm.  That's convenience and it's especially important when whole families are traveling.

I am conscious also of the potential for TEFL schools (schools which teach English as a foreign language) and other businesses in the West and North West of Ireland to use this service to attract Spanish visitors direct to this region.  Last year 243,500 Spanish people visited Ireland and Irish tourism businesses do have opportunities here"

Speaking on behalf of the Spanish Tourist Office in welcoming the new service, José Manuel de Juan, Director, said: "It's great news that Alicante is now closer to Irish people and indeed Spanish people living in the West and North West or Ireland.  Alicante city and the Costa Blanca area are perfect destinations for families, as well as for couples or for the over 50's, it is a region that caters for all kind of interests and I am sure that it will become a favourite among the residents of the West and North West of Ireland."

Alicante International Airport is the sixth busiest airport in Spain and in 2008 it handled 9.5 million passengers. Ryanair established a base at the airport in 2007.

Famous for its excellent weather, Alicante is one of the fastest growing cities in Spain and is well known to Irish holidaymakers with its extensive coastline and beaches. Its bustling and vibrant harbour makes it a favourite holiday hot spot not only as an ideal sun holiday but also a fantastic city break. The city of Alicante has fashionable shops, first class hotels and a modern marina. As the provincial capital of Valencia, Alicante also offers excellent architecture, arts, crafts and cuisine.