SAUDIA Resumes Flight Service from Vienna to Riyadh and Jeddah 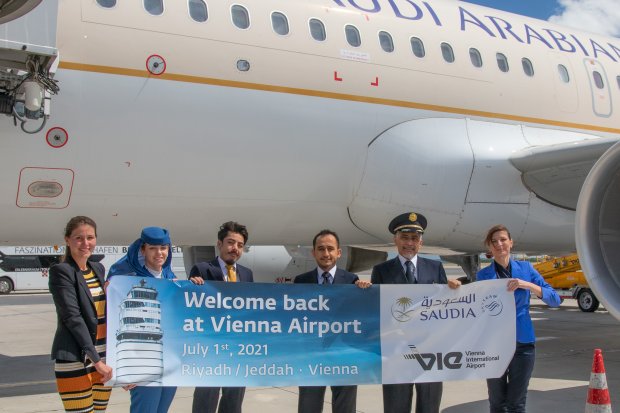 Saudi Arabia’s largest airline is once again offering flights to Vienna. Starting today, 1 July 2021, SAUDIA has resumed flight service linking Vienna with Riyadh and Jeddah. An A320 aircraft will be deployed for two flights per week for flights to the Saudi Arabian capital city of Riyadh and to the important Saudi seaport of Jeddah. Following a break of more than one year due to the coronavirus pandemic, the airline has once again added Vienna to its route network. In accordance with the new entry regulations, fully vaccinated travellers from third countries are allowed to enter Austria without having to go into quarantine (starting fourteen days after the second vaccination).

About SAUDIA
Saudi Arabian Airlines (SAUDIA) is the national airline of the Kingdom of Saudi Arabia. The airline was founded in 1945 and is a member of the International Air Transport Association (IATA) as well as the Arab Air Carriers Organization (AACO). At the awards ceremony of the Skytrax World Airline Awards in the year 2017 held within the context of the Paris Air Show, SAUDIA was named the “World’s Most Improved Airline” for the year. This honour is considered as recognition for the growth and improvements of an airline in several categories within the course of the year. The airline has a fleet of 144 narrow-body and wide-body Airbus and Boeing aircraft and serves destinations on four continents. It is the world’s first airline to operate the Airbus A330-300 Regional.