ANDREW O’BRIAN, A PERSONALITY THAT PROMOTES THE SUCCESS OF TOURISM IN LATIN AMERICA 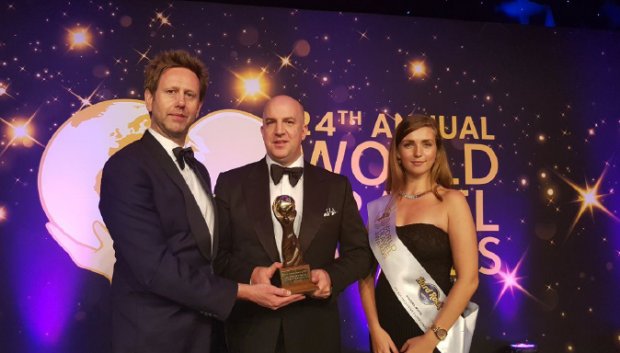 Andrew O’Brian, President and CEO of CORPORACIÓN QUIPORT, was awarded the 2017 South America’s Leading Personality Award by the World Travel Awards (WTA) due to his great performance and successful administration of the Quito International Airport.

During his tenure, the capital city’s airport has obtained four consecutive awards as South America’s Leading Airport from the WTA, became the third airport that has obtained more awards in South America, and received more than a dozen prizes from the industry and the
users due to the quality of the services offered.

The award was delivered on September 9 and is a special recognition granted by the WTA committee based on a survey among the major tourism stakeholders in Latin America who praised his leadership, experience and vision which contribute to the growth of tourism in the region.

Mr. O´Brian thanked the members of WTA and highlighted the pride in putting every effort and ability upon leading such a significant project for the city, the country and the region such as the Mariscal Sucre International Airport.

“This award is a commitment to continue working even harder together with my team at Corporación Quiport and with the eight thousand employees and 120 companies that operate at the Quito airport in all the technical and service areas”, O’Brian emphasized, and said that the airport’s success is due to the passion and efforts of all the workers and to a well-planned management model where investments are made in terms of the city’s dynamics and the users’ needs.

Mr. O´Brian is an internationally experienced airport leader. Currently he is the President and CEO of Corporación Quiport S.A., a consortium in charge of the construction, administration, operation and maintenance of the Quito International Airport. Before his appointment as Director General, he was Vice President and Operations Director since April 2012.

Previously he was Executive Director of Aerodom in the Dominican Republic where he successfully achieved the modernization of the country’s six international airports, and was Operations Director in Vancouver Airport Services. O’Brian has worked in several aviation and airport projects throughout the Americas, including the reactivation of COPA airlines operations in Costa Rica.

Andrew is presently the First Vice President of the Airports Council International (ACI) Latin America / Caribbean – Regional Board. He also sits on the ACI World Governing Board and the International Association of Airport Professionals (IAAE / AAAE).

He holds an MBA with a specialization in Aviation from the John Molson School of Business at Concordia University in Montreal, a Diploma in International Management from Vancouver’s Capilano University and a BA in Political Science from British Columbia’s University of Victoria in Canada.