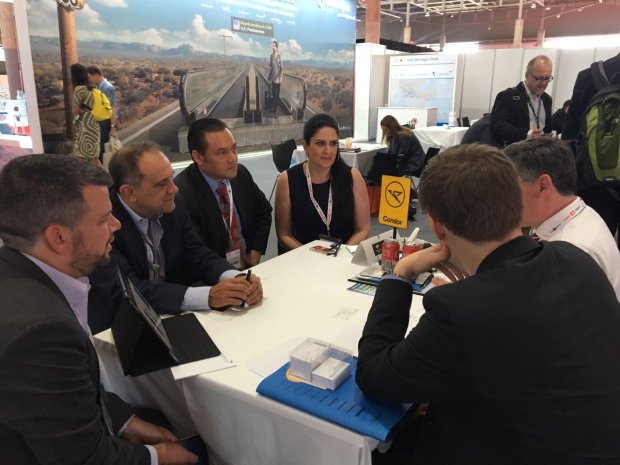 Business cases were submitted at the meetings to important airline companies including UK-based British Airways and Germany-based Condor Airlines.  Andrew O’Brian, President and Director General of Corporación Quiport, noted that “participating in Routes is highly positive because we can meet face-to-face with key players in the industry and expound the potential of certain non-stop routes to Quito.”

As on past occasions, Quiport’s team was accompanied by Quito Turismo’s General Manager Verónica Sevilla, who was given an opportunity to promote the city’s tourist attractions.  Joint work with authorities is key to success in negotiations.

The results of the meetings will materialize in the medium term, explained Andrew O’Brian.  “In order for an airline to open a new route, up to two years may elapse from initial discussions.  Airlines thoroughly study each proposal they receive because opening a new route involves substantial risk; it is therefore vital to do work in advance and submit a complete study including costs and anticipated load factors.”

Routes is the major event that brings airlines and airports together to develop greater connectivity.  This year’s edition brought together 3000 delegates, 300 airlines and 700 airports from 110 countries around the world.

The Routes Americas 2018 chapter will take place in Quito, Ecuador in February 2018 and will be hosted by the city of Quito and the Quito International Airport.  It will bring industry players in the Americas together.

Regarding the election of Quito as host city for Routes Americas 2018, Andrew O’Brian said that organizing the event in the Ecuadorian capital represents a great opportunity but also involves great responsibility.  “Organizing Routes Americas in Quito will allow airline representatives to get first-hand knowledge of Quito’s potential as a destination and its attractions for both the tourism and the meetings and conventions segments,” he said, but added that “Quito Turismo and Quiport, as hosts, will be responsible for organizing this conference under the same standards as used for Routes events worldwide.  Quito and its airport are leaders in South America and will be up to the standard set for the event.”