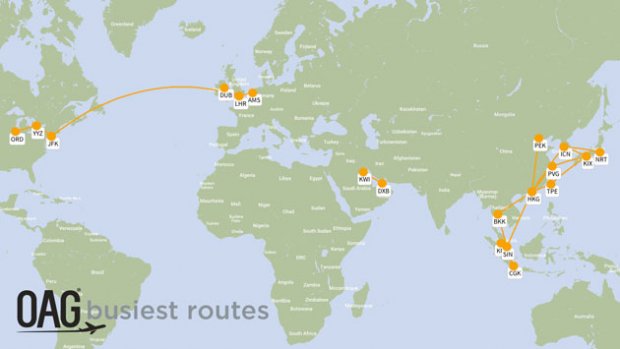 The 20 busiest international routes in the world each have an average of more than 35 dailyscheduled airline frequencies operating on them, and as many as 84 each day in the case of the busiest – the Kuala Lumpur - Singapore route.

In this latest global ranking from OAG, a series of useful metrics are brought together for each of the Top 20 busiest international routes, from the types of aircraft equipment used, to trends in airline capacity, prevalence of low-cost airlines, on-time performance and the most popular passenger connections at either end of the route.

Unsurprisingly, 14 of the Top 20 routes operate to, from or within Asia and routes which connect Hong Kong, Singapore, Seoul and Osaka to other parts of Asia feature strongly. All of the top 7 routes are routes within Asia, demonstrating the intensity of travel between key hub airports and cities.

Outside Asia, there are 5 short haul routes which are operated with a high density of scheduled air service. These are New York LaGuardia - Toronto, Dubai - Kuwait, Dublin – London Heathrow, Amsterdam -London Heathrow and Chicago-Toronto.

The only long-haul route which features among the Top 20 busiest international routes is New York JFK-London Heathrow which supports an average of 38 daily frequencies. Ranked 16thin terms of flights and 14thfor passenger traffic, the fact that a long-haul route operated by wide-body aircraft such as this does not rank higher for traffic reflects the use of some large aircraft on some of the shorter routes as a means to address airport congestion and slot availability.

Many of the Asian routes are experiencing strong competition, with an average of 7 carriers – in one case 11 carriers – operating on each route. By comparison, the European and North American routes, in more mature markets, are operated on average by just 3 carriers.

To view the full results from the OAG Top 20 Busiest International Routes, and download a copy of the full report, click here