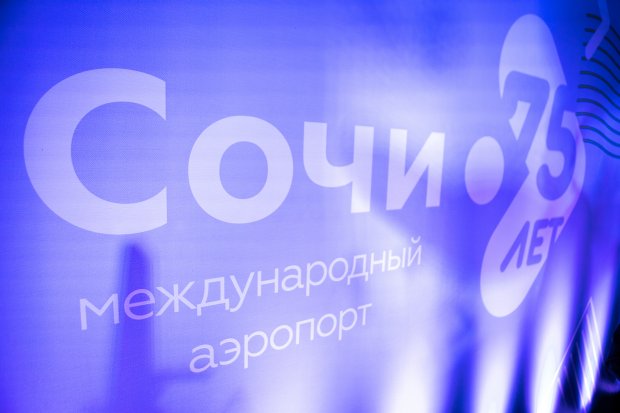 On November 23, 2020, Sochi international airport celebrates its 75th anniversary from the foundation. On that day, General Directorate of civil air fleet signed the decree No. 236 on the foundation of Sochi airport.

On November 23, 2020, Sochi international airport celebrates its 75th anniversary from the foundation. On that day, General Directorate of civil air fleet signed the decree No. 236 on the foundation of Sochi airport.

For the last 10 years, the airport has been operating as a modern terminal complex with a total area of 65,000 square meters. The constructing of this complex began in the Soviet period on October 20, 1989. Two years later, by the end of 1991, the project was 90% complete. The constructing was suspended due to the collapse of the USSR, and was stopped altogether in 1994. The facility was preserved for 12 years.

In 2006, the airport was purchased by industrialist Oleg Deripaska and entered Basel Aero group. The project was unfrozen and global work began on the completion of the building and the development of the surrounding area. In September 2010, the new terminal of Sochi airport was officially launched into exploitation. Due to the imposing terminal area of 65,000 square meters and constantly growing passenger traffic, Sochi airport has become one of the largest airports in Russia, and the main resort of the country has received one of the most convenient and beautiful air terminals in the South of Russia.

The airport has experienced different times during its 75-year history, but the main and new history of the airport is connected with the preparation for the 2014 Winter Olympic Games. A huge reconstruction and modernization of airport was carried out during the preparation for the 2014 Olympics. The total investment in this important project amounted to more than 14 billion rubles. In 2010, a new terminal was put into exploitation. It became the first fully operational key object of the 2014 Olympic Games.

Moreover, as part of the airport's modernization, two runways were reconstructed and lengthened, the network of taxi tracks, apron, VIP apron and aircraft parking areas were spruced up, and all the necessary airfield equipment was purchased. In 2013 the renewed terminal finder with 10 telescopic passageways was launched. Due to these changes, Sochi airport is now able to accept almost all types of domestic and foreign-made aircraft, up to the largest Boeing 747 and Airbus A350.

All the achievements of the airport in recent years are based on the philosophy, principles of production and business organization, introduced by the company's founder Oleg Deripaska from other businesses - mechanical engineering and metallurgy. Owing to the new productive system and continuous improvements in business processes, Sochi airport is able to cope with any market challenges.

The introduction of innovations is one of the major directions of the airport’s work. Since 2016, the airport has implemented modern check-in methods that reduce the time spent on pre-flight procedures, as well as services for a comfortable stay at the airport - self-check-in service, online check-in on the website and self-check in kiosks with devices for printing boarding passes. All these services allow passengers to save time passing pre-flight procedures at the airport. According to airport experts, this process takes about 60 seconds.

Passengers can check in their luggage by themselves at dedicated counters in the terminal. This technology was launched in the beginning of 2020. There are six automatic self-service-Luggage drop-off kiosks in service. Preliminary a passenger can weight his luggage next to the self-check-in kiosks to verify the norm of luggage set by an airline.

At the stage of completion of the terminal project, a program of a barrier-free environment for people with limited mobility was implemented. As part of the program, four elevators are installed in the airport building; special check-in counters and a line for pre-flight inspection are allocated. Additionally, alternative methods of informing visually impaired passengers have been introduced in the form of placement information in Braille, for the hard-of-hearing –through the induction loops, etc.

By the results of 9 months of 2020 Sochi airport ranks 1st place in the Airport Service Quality (ASQ) among European airports in the category from 5 to 15 million passenger traffic. The airport competes in the ranking with the air harbors of such cities as Krakow (Poland), Reykjavik (Iceland), Vilnius (Lithuania), Bologna (Italy), Porto (Portugal) and others.

Passengers noticed such advantages of Sochi airport compared with other airports as:

Passengers give high marks including the price-quality ratio to cafes and stores of Sochi airport particularly in comparison with other airports-rivals. Passengers consider this mark one of advantages at evaluation because high prices is one of the points for which airports are most often criticized.

Due to the changes air terminal of Sochi airport is currently able to serve 2 500 passengers per hour and coup with increased loads. These, for example, were observed in the summer season of 2020, when the daily passenger traffic of the airport reached 45 000 people.

Today Sochi airport is not only hallmark of the resort capital of Russia, but also the entire country. The main air gate of the South receives millions of tourists from the whole of Russia and guests from different countries of the world, deservedly representing our homeland in the international arena. Owing to the professionalism of the entire airport staff, its organization and discipline, high level of flight safety and culture of passenger service, the airport occupies a significant place in the infrastructure of the region and is one of the best in Europe.

I congratulate and thank from my heart the entire staff and our partners for the successful, worthy and conscientious work and achieved results. And let the airport always be in the center of significant and interesting events!