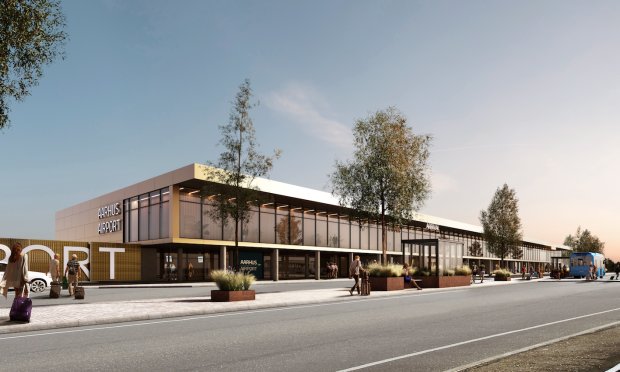 Danish design throughout the airport - construction work completes ahead of time, in 2022

Aarhus Airport in Denmark will be the world's first with a VIP end-to-end experience thoughout, for all customers and generations.  This exclusive vibe is underlined by the airport's elegant new golden look when construction work completes in 2022.

The airport unveiled how its completely modernised airport will look at a press conference addressing when redevelopment work of approx. DKK 140 million will be completed ahead of time, in 2022. The design thread in the airport’s terminal, which will double in size from approx. 5,000 to 10,000 m2 , will be consistently Nordic throughout, with sharp lines, softened by a warm and welcoming glow - more precisely a golden glow. The facade of the airport is being constucted in sustainable materials, metallic gold in colour and with expansive glass sections showering natural light into the airport’s calming interior space. Despite the current standstill in air traffic, Aarhus Airport cements its clear long-term vision and is gearing-up to be the Greater Aarhus and East Jutland region’s international gateway for the future.

“We continue to stick to the ambitious growth strategy we presented in 2019. The goal is 1.5 million passengers by 2027.  Modernisation is an essential move to make the airport attractive to international airlines and increase aircraft movements, as well as to service a much larger number of customers. Our facilities will be top-tuned, and the entire guest experience is being lifted-up to that same higher league. That is of course a special situation to  handle and navigate, achieving turnaround during a pandemic, but we are already seeing many positive signs in our route development work and we have full confidence that the airport will deliver on all parameters. In fact, just last night, Ryanair confirmed another brand new route at Aarhus Airport, opening its first Greek service as soon as July ", says Nicolai Krøyer, who took over as the new CEO of Aarhus Airport on 1st March 2021.

As part of the modernisation, the airport is expanding with the addition of three new boarding gates, so that seven terminal-side aircraft can be handled at one time. Simultaneously, a new two-storey departure and transit lounge is forming, with 500 m2 of on the lower floor allocated to brand new tax-free shopping, while the first floor will feature smartly furnished lounge areas with panoramic windows offering an uninterrupted vista of the runway, as well as the new café and restaurant. In terms of design, the interior follows the sustainable Nordic theme with furniture from Danish design house HAY. A new airport hotel is fully-integrated within the terminal’s first floor level; corridors facing the car park and rooms bathed with natural light. Among other things, the hotel will meet the need for accommodation by international business travelers on early and later timed flights – and more of them are coming – according to Mayor of Aarhus, Jacob Bundsgaard. At the same time, the mayor assesses that continually improving accessibility to the airport is a very important competitive parameter and vital for the city, the economy and the airport's further growth.

“Greater Aarhus is the Nordic region’s fifth largest population base and mainland Denmark’s largest growth center – we have a great number of international headquarters and companies as well a world-class university. They deserve a top-tier airport that can fully support and facilitate further business development as well as increase the attraction of overseas talent, skills and a growing number of international tourists. Our business travellers and vacationers must have ample opportunity to fly to attractive destinations, plus, it must be smooth to get to and from the airport. Therefore, we would like the R15 route from the city centre upgraded to motorway all the way to the airport, desirably also to the city of Grenaa, so we can fully embrace the development of the region. Ultimately, it is also relevant to identify a light-rail solution directly to Aarhus Airport ”, says the mayor of Aarhus, Jacob Bundsgaard.

The airport is well ahead on its upgrades, which also include a six-lane ultra-efficient security screening area, expanded car parking areas, expanded hangarage for aircraft, new police and customs facilities, sound-proofed play area across two floors, a teenage lounge with soccer field, flight simulator and more. The design of the airport has been prepared by all Danish companies, among others AART Architects, Schmidt Hammer Lassen and AMPM Design Studio. In May, construction of the airport hotel begins and Aarhus Airport itself will manage the operation of the hotel and guest experience.

Caption: Gold has been awarded to Aarhus when the mainland Danish airport's construction works is completed in 2022. Aarhus Airport’s exterior design is in sharp Nordic style in golden tones.