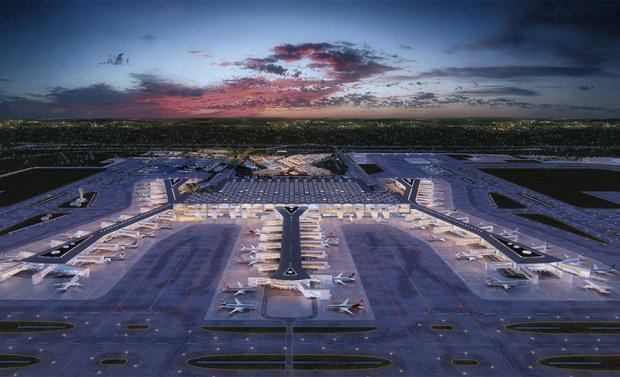 CEO and Chairman of the Executive Board at iGA Airport Operations H. Kadri Samsunlu answered Aaron Heslehurst’s questions on BBC’s Talking Business show he was invited to.

Turkey’s gateway to the world and the biggest hub in the region, Istanbul Airport has been on BBC with all its details As a guest on veteran journalist and host Aaron Heslehurst’s program, CEO and Chairman of the Executive Board at iGA Airport Operations H. Kadri Samsunlu shared the latest information about Istanbul Airport’s global goal and the airport itself.

Aaron Heslehurst, highlighted Turkey’s ambition on the subject by stating that the airport will be carrying 90 million passengers per year as one of the biggest airports of the world. Samsunlu said the following upon Heslehurst’s remark about Türk Hava Yolları(THY)’s recent actions having positive impacts upon Istanbul Airport: “Turkey has been contributing important infrastructure investments to the aviation sector in the last 10-15 years. In this time window, THY has expanded its fleet and contributed to the global rise of aviation sector” and continued: “Istanbul Airport, will draw in a lot of new airline companies alongside THY once all the phases are completed. People from China, India and from many other nations prefer Istanbul Airport for tourism or business travels or connecting flights to get to whichever country they wish to arrive. Thanks to such attribute, Istanbul Airport generates a global value. Istanbul Airport benefits many airline companies with THY being the primary. In time we will see the contributions of Istanbul Airport more clearly.”

“Aviation sector had a significant growth in the last 40 years...”

Samsunlu continued with the following after Aaron Heslehurst said that Istanbul Airport aimed to reach a passenger capacity of 200 million passengers once all the phases are completed: “Aviation sector had a significant growth in the last 40 years. If you look at the growth, there is a constantly growing graph except the period between the September 11 attacks and the 2008 economic crisis. Today, 4 billion people per year travels, this number will rise to 8 billion per year in the next 20 years. As these people can’t remain flying, there must be airports they can land on. For this reason, the entire world should pay attention to their infrastructure investments, not just Turkey. Schiphol, Heatrow, Frankfurt and Dubai Airports make these investments. Demands for infrastructure investments shall only rise further.”
You can see the video of BBC’s news report dated 5 September 2019 at:  https://www.youtube.com/watch?v=rxBOREre0c8&feature=youtu.be