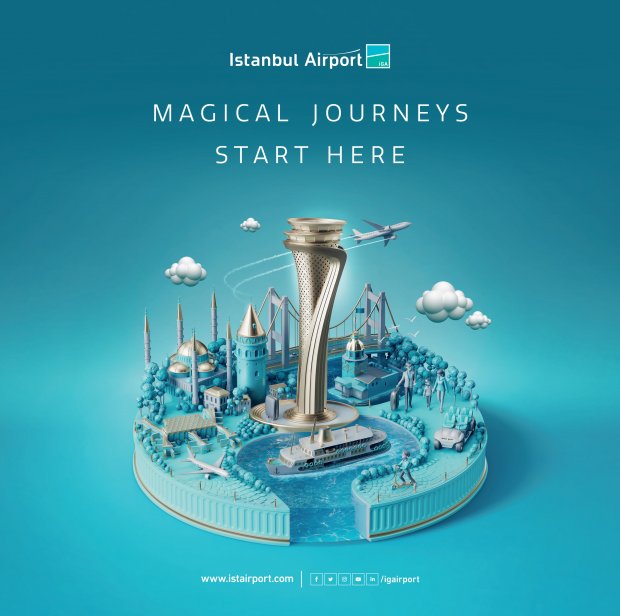 In addition to its unique architecture, strong infrastructure, superior technology and high-level travel experience, Istanbul Airport, which became a global transfer center in its first year, highlights the unique beauties of Istanbul with innovative 'key visuals'.

Being among the best in the world in aviation and attracting attention with every detail, Istanbul Airport continues to stand out with its extraordinary features. Making a worldwide impression over its architecture, services and technology offered to its passengers, Istanbul Airport is in the limelight as a pioneering project with all the works it has carried out.

Identified with Istanbul Airport's assertion, the design works created with a "a new world" and "a new story"  goal reflect the legendary position of the project, the magic it adds to the journeys and a new experience.

Focus of visual designs; The magic door opening to Istanbul...

Making a magnificent and large area like the terminal building of Istanbul Airport look more sincere in terms of design stands out as another important goal of the works. A magical world emerges with 3-dimensional elements in designs that attract attention with their bright color palette. The detail diversity makes it possible to notice new things at every glance and to discover this world over and over again.

The designs inspired by Istanbul takes the shining  Istanbul Airport, which rises at the heart of the world of fairy tales, at the center of the city symbols in the world, beyond being an airport and position it as a monument that has become a world-wide legacy for the future, and most importantly, it is monumentalized.

With its new key visuals on which everything started with a scratch, a special world was created for Istanbul Airport, which won worldwide awards, and some works were carried out to make the design original.. In order to achieve the original design goal, the hand drawing method was preferred and the use of photography was particularly avoided.

The first drafts of the key visuals started with drawings on paper and these drawings were later detailed to form the basis of the magical world of Istanbul Airport. The key visuals of Istanbul Airport, detailed in the later phases, were transferred to the computer environment from the papers. The key visuals, in which each drawing was made with a digital pen, were developed and colored in computer environment and taken to the final stage.

To give the characters and all other elements 3 dimensions and dynamism, the delivery preparation phase was started and a film was prepared in addition to the effect touches reinforcing the impact of the fixed designs. In the film, which literally drags the audience into this magical world, animated details were allowed to be seen more closely.

"We will be the most well-known airport with our new key visuals..."

Commenting on the new key visuals prepared for Istanbul Airport,  İGA Airport Operations Corporate Communications Director Gökhan Şengül  made the following statement: " The original design of Istanbul Airport, handling modernity and functionality together, takes its inspiration from the cultural heritage of Istanbul in terms of architecture. And we reflect the culture and values of Istanbul in our works and keep these values alive at our airport. In conclusion, with this approach, we have created our new key visual with an architectural idea that reflects Istanbul's rich social and cultural heritage. It is possible to see the motifs, beauty, texture and depth used in Turkish-Islamic art and architecture in our new designs. We have also prepared a comprehensive communication plan with our new key visuals. The visuals and the film, of which Turkish and English versions will be available in all areas within the airport, will be supported by being shared on our social media accounts. At a later stage, in accordance with the 360-degree communication plan prepared to share Istanbul Airport's new world of communication with Turkey and the world, the domain of communication activities will be expanded and communication mediums will be enriched. We believe that our new key visuals allowing the success story of Istanbul Airport to be remembered, will win everyone's approval. As Istanbul Airport, we are among the most important airports of the world. We successfully represent Turkey in the world and lead the aviation industry with the service we offer. We believe that with our new designs, we will contribute to the recognition of our ancient city of Istanbul, and Istanbul Airport, in the world."

“has written SkyUp Airlines launch flights between Istanbul and Kyiv”