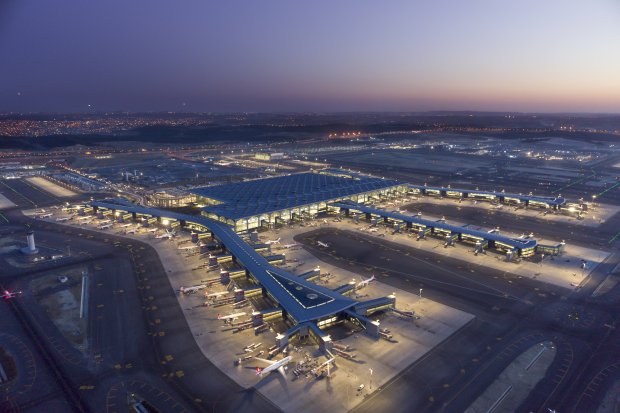 Istanbul Airport, which has been drawing attention with the health measures taken during the pandemic, was deemed worthy of this certificate within the scope of "Airport Health Accreditation" which was initiated by the Airports Council International (ACI) in 2020.

Offering passengers an "absolutely safe" journey with the strict health measures taken during the pandemic, Istanbul Airport was rewarded again with the "Airport Health Accreditation that was given by the Airports Council International (ACI) after an audit consisting of 72 questions under 5 main chapters and a total of 134 sub-items. The first airport in the world to receive this certificate last year, Istanbul Airport was also the first airport to be awarded the certificate again.

For the Airport Health Accreditation, Istanbul Airport was audited under 5 different chapters...

Istanbul Airport further strengthened its place among the most hygienic airports in Turkey and the world by getting awarded with the certificate given by the Airports Council International (ACI) after a strict audit. Entitled to receive the Airport Health Accreditation certificate, Istanbul Airport passed the audit by fulfilling all the criteria under 5 different chapters including General Information, Covid-19 Action Plans, Measures Taken for Passengers, Measures Taken for Staff, and Adaptation and Cooperation.

The audit assessment included procedures adopted for COVID-19, risk analyses, social distancing practices, cleaning and disinfection processes, mask and face shield use, health screening activities, passenger density management at terminal entrances and areas with high passenger traffic, technology use and contactless payment, personnel training and working environment, execution of plans related to the stakeholders at the airport, and the committees established for the pandemic.

In order to provide objective evidence for the questions asked by the Airports Council International (ACI) auditors, iGA shared a total of 122 videos and photos of practice examples showing health and hygiene conditions in all areas of the Istanbul Airport. The Airport marked a big achievement by passing the audit with no shortcomings or unfavourable findings.

We ensured sustainability in health measures...

Kadri Samsunlu, the Chief Executive Officer of iGA Airport Operation, made statements about Istanbul Airport being rewarded again with the "Airport Health Accreditation" certificate:"For about 2 years, the whole world has been struggling with a health crisis that has deeply affected the humankind. With the acceleration of the vaccination campaign and the beginning of the summer season, we entered a process in which we are approaching the best scenario in terms of aviation. As iGA, we have come a long way in terms of health measures by putting extra effort until we saw this optimistic view. Seeing that the steps taken in terms of health measures in Istanbul Airport were later implemented in different industries is the biggest proof of how we excelled at our work. This year, we continue our efforts to offer our passengers "a safe travel experience" by keeping hygiene at the highest level. Once again, we have been awarded the "Airport Health Accreditation" that was given to Istanbul Airport for the first time last year by the Airports Council International (ACI). With this certificate, which we received through rigorous audits, we also ensured the sustainability of our practices in health measures. I would especially like to highlight that we will never compromise on the hygiene standards achieved in Istanbul Airport".

ACI World Director General Luis Felipe de Oliveira and ACI EUROPE Director General Olivier Jankovec said that: “Airports have been prioritizing Health and hygiene as they work to restore both passenger and government confidence in travel. Recovery will be best achieved through a coordinated and globally harmonized approach, which is aligned with global standards. ACI’s Airport Health Accreditation programme is a crucial part of this and, as airports seek re-accreditation, the dedication of airports to passenger safety throughout the restart and beyond is underlined. “A year ago, we recognized Istanbul as the first accredited airport in the world, and we congratulate Istanbul for being the first airport to be re-accredited. They have set an example for the industry, demonstrating their continued focus on the health and welfare of travellers, staff and the public.”