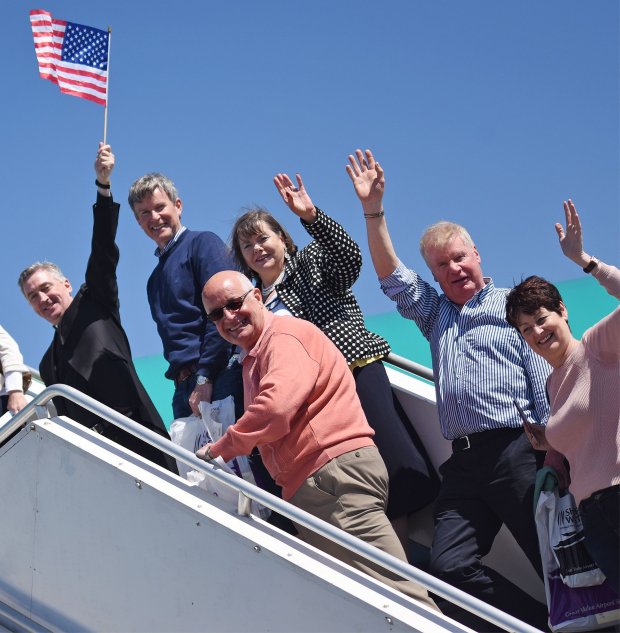 Fr Richard Gibbons, Rector, Knock Shrine boards the special Aer Lingus charter to New York from Ireland West Airport for a special and historically unique 6-day trip. The primary purpose of the visit is to have the remains of John Curry, the youngest person to witness the Knock Apparition of 1879, re-interred from the current location at Pine Lawn Cemetery, Long Island to St. Patrick’s old Cathedral, New York.

Yesterdaywas a remarkable day for the people of Knock and the Irish diaspora in New York as Fr. Richard Gibbons, P.P., and Rector of Knock Shrine led a group out from Ireland West Airport to New York with Aer Lingus in glorious sunshine.

For the last two years, Knock Shrine and Ireland West Airport has welcomed pilgrimages in from New York and Boston and today had the privilege of bringing the people of Knock and the West and North West of Ireland across the waters for a special and historically unique 6-day trip. The primary purpose of the visit is to have the remains of John Curry, the youngest person to witness the Knock Apparition of 1879, re-interred from the current location at Pine Lawn Cemetery, Long Island to St. Patrick’s old Cathedral, New York.

John Curry was just five years old when he, along with fourteen others witnessed a miraculous phenomenon at the gable wall of the Parish Church. Little did he know at that time what life would bring his way, however he like many others at the time left Ireland for New York where he remained until his death in 1943.

The remains of John Curry will be brought to old St. Patricks Cathedral, Manhattan on Saturday 13th May where a special requiem Mass will be celebrated. It is a great honour bestowed by the Archbishop of New York for Knock Shrine and for John Curry’s family to have his remains transferred to the historic centre of the Irish.

Fr. Richard Gibbons, P.P., and Rector of Knock Shrine commented, ‘I am delighted to be leading this historic trip to New York today. The significance of the visit is two-fold in that it will recognise John Curry’s place as a witness and native of Knock and also pay tribute to others like him, the “forgotten Irish” who faced the desolation of leaving home never to return. This unique trip provides an opportunity to take part in a special, once in a lifetime trip flying out from Ireland West Airport to New York and take in the various sights and places of significance and to be part of something very unique and special.’

Joe Kennedy, Chairman, Ireland West Airport, who was part of the travelling party said ‘I am delighted to be part of yet another historic service with Aer Lingus to New York today, which is another milestone in the relationship between the airport and Aer Lingus. This follows on from the hugely successful charter programmes from New York in 2015 and Boston in 2016 and further highlights the possibilities of pilgrimage growth and the strategic importance of Ireland West Airport to the future of Ireland's National Marian Shrine. We are looking forward to an enjoyable and historic week in New York’.