The Tolmachevo Airport - Member of the Routes Asia 2012 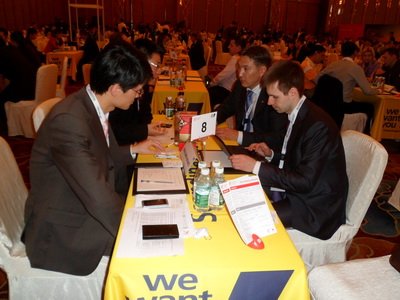 The Delegation of The Novosibirsk Airport (Tolmachevo) participated in the Asian forum for the development of air routes of Routes Asia 2012 held from 15 to 17 April in the Chinese city Chengdu. Forum brings together the major airports and airlines of the world.

There were also reached preliminary arrangements on the implementation of technical landings in the Tolmachevo Airport by aircrafts of Jade Cargo International and China Cargo Airlines, arrangements on the prospects for the opening of charter passenger flights by the airline Vietnam Airlines on the route Ho Chi Minh City - Novosibirsk - Ho Chi Minh City, as well as on the reopening in August 2012 of regular passenger flights from Novosibirsk to Beijing by Hainan Airlines.

The Novosibirsk Airport (Tolmachevo) is the largest air hub east of the Urals located on key transit routes between Europe and Asia. The capacity on domestic flights is 1,800 passengers per hour, on international flights - 750 passengers per hour. The airport has two runways. According to business plan in 2012 The Tolmachevo Airport plans to serve 3,155 thousand passengers that is 14% higher than in 2011. Since 2007, the Tolmachevo Airport participates in the   Routes Forums, which were held in Stockholm, Macau, Kuala Lumpur, Beijing, Adelaide, Vancouver and others.