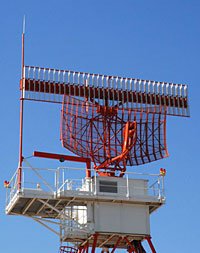 May 2011 - London Oxford Airport (OXF)  announced at EBACE in Geneva, its decision to install the latest generation radar system, a continuation of the current major phase of development at the airport. The system will be supplied by Thales UK with project management by NATS. Combined with further communications system upgrades, this represents a further investment by the expanding airport of £4.5 million and the intention is to have the radar operational well ahead of the Olympics in summer 2012.

The primary and secondary (Mode-S, MSSR) surveillance radar system will enable more efficient transits through local airspace as well as increase the throughput of IFR flight activity. The state-of-the-art Thales solid state STAR 2000 primary and secondary radars will feed data into the Eurocat-C radar display system. One feature of the system is the option to reduce the effects of wind turbines on the radar picture where future large wind turbines may be an issue, should their numbers increase around the south east UK. Such a feature is one that legacy systems are not readily able to deal with today.

With a steady increase in commercial airline activity and continually accelerating business jet traffic, the go-ahead for the Thales system is one of the most significant infrastructural steps in the airport’s history.  Owned by a subsidiary of the Reuben Brothers property portfolio, investment will continue with the installation of radar giving far greater control and situational awareness to both the airport and its users.

Commenting on the new project, an airport spokesperson stated: ‘With our intent to further build upon the significant growth in commercial and business aviation seen so far, this is another important tool in our inventory which facilitates a faster throughput of movements and gives us even more advantages over a number of peer airports in the south East.’

David Surley, the airport’s Head of Route Development added: ‘This major investment demonstrates our owner’s commitment to the airport’s future by selecting market-leading technology in this field.  It also follows a recent commitment to the latest generation Iturri fire tenders – the state-of-the-art Spanish built vehicles being the first of their kind for the UK.’

Oxford Airport has increased its hangarage by over 80% over the last five years. It has recently expanded its apron space for heavy jets by 4.4 acres (nearly three football pitches-worth), and in 2007 it rebuilt and widened the runway (now Code 3C compliant). With runway widening came the installation of ILS which, combined with the availability of the new radar service, will now give the airport full accessibility under all seasonal conditions and safeguard for any UK airspace changes in the future. In 2008 it established oxfordjet, the airport’s award-winning executive business aviation and airline handling terminal. The runway lengths were also recently increased by up to 21% having gained Code 3C compliance.  Airline operations started in Summer 2009 on the Jersey route, now operated by CityJet, to Geneva from Winter 2010 and now a wide range of charter carriers operate leisure and business flights.  The airport is expecting further new scheduled routes to open soon.

It is anticipated that the new system will be fully operational in good time ahead of the 2012 Olympic Games, at which point a considerable increase in demand for capacity is anticipated. Thereafter, the airport will be fully equipped for whatever the future may hold as the owners continue to invest in making the airport one of the most progressive in the London region.