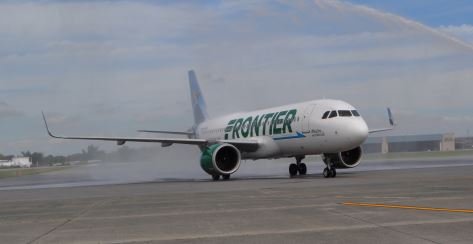 Tuesday’s announcement is the latest news from the Denver-based low-cost airline regarding its New York service.

In July, Frontier said it was starting flights from Stewart International Airport in Newburgh, Orange County, to Orlando, Miami and Tampa, Fla.

Round-trip fares between Albany and Miami will be as low as $98.

“Today’s announcement by Frontier that they are adding year-round service to Miami is yet another indication that Albany International Airport is ‘Going Places’ ”  Philip Calderone, CEO of the Albany County Airport Authority, said of the news.

“We are proud to continue partnering with Frontier to grow their offerings here in the Capital Region, and are confident that this route will be extremely popular with local leisure and business travelers.”

Frontier’s service from Stewart to Orlando will start in October, with flights to Tampa and Miami beginning in November.

The airline’s Albany to Orlando and Tampa flights started less than a year ago.

Airline officials said business is up over 2020 when people were locked down by the COVID-19 pandemic and skipping lengthy travel vacations.