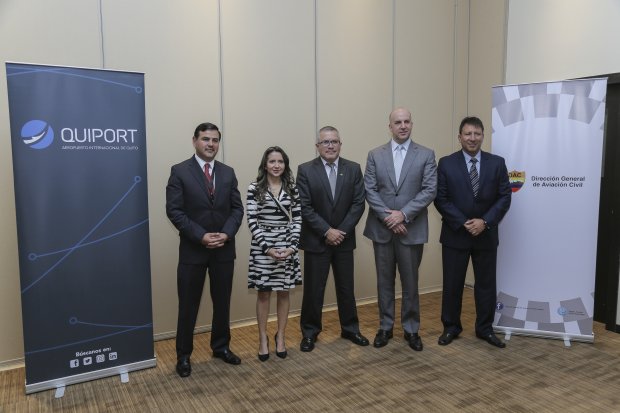 ILS is the support system for approach and landing regulated by ICAO, the International Civil Aviation Organization, which allows aircraft to be accurately guided during their approach to the landing strip and, in some cases, along it. This system has 3 categories of operation.

Since 2013, the Civil Aviation of Ecuador, in coordination with Corporación Quiport, has been implementing air navigation aids in order to increase the operating availability of the city’s airport under presence of fog.  Equipment and systems such as the ILS, RVR (Runway Visual Range) and centerline lighting were installed.  “Upgrading from Category I to II permits greater availability of operations at the air terminal in adverse atmospheric conditions and allows us to be on the same level as large airports on a global scale,” highlighted Civil Aviation Director, Luis Carrera.

Category II approaches allow airplanes to land using a 110 ft. decision height and visibility of only 350 m. “Thus, we will avoid passenger and airline setbacks due to delays, reroutings and cancellations caused by the presence of fog,” stated Carrera.

In turn, Quiport President and CEO, Andrew O’Brian, highlighted that Quiport’s management had set achieving Category II as one of its principal objectives; thus becoming the first airport in the country to obtain this certification.  “The intense collective work among Quiport and Civil Aviation technical staff to fulfill all the requirements to achieve Category II underlies this important news. This is a great contribution to the development of air transportation in Ecuador.”

Increased fog is evident from January to April, when the presence of this meteorological phenomenon is more frequent in the area where the airport is located. At the beginning of operations in February 2013, the Quito airport had minimum visibility standards of 2.5 kilometers that is now reduced to 350 meters due to implementation of a series of support systems.

Corporación Quiport is the company in charge of the total operation of the Mariscal Sucre International Airport in Quito, Ecuador, located in Tababela, at 24 kilometers from the country’s capital.

Quiport is formed by important companies with vast experience in the concession and operation of airports:  CCR of Brazil, Odinsa S.A. of Colombia and HAS Development Corporation (HAS-DC) of the USA.

About Civil Aviation of Ecuador:

It is the entity responsible for developing the country’s Air Navigation and is constantly implementing new conventional routes based on satellite navigation in order to optimize domestic and international flights (Performance Based Navigation), actions to reduce CO2 emissions and decrease in flight times for companies and passengers.

Due to its infrastructure, information systems, customer service management, environment and energy efficiencies, among other aspects, the Mariscal Sucre International Airport has obtained recognition on an international level.