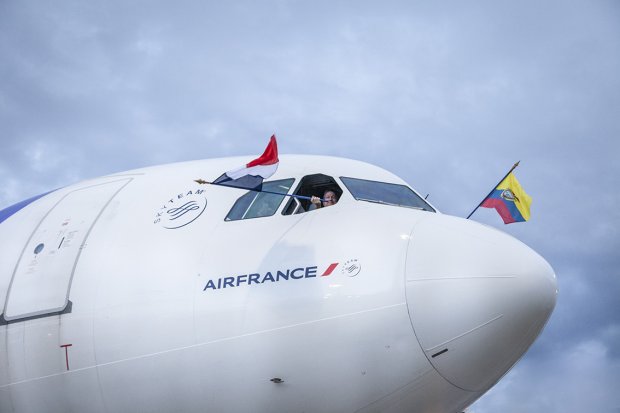 Since Thursday, May 23, Quito has been directly connected with Paris through Air France with a flight that will operate three times per week.

Arrival of new airlines to this country as well as increased frequencies ratify a business confidence in Ecuador, evidencing the joint efforts of the public enterprise and Corporación Quiport whose main objective is to develop the city's connectivity with various destinations, thus encouraging tourism, cultural exchange and generation of new businesses for Ecuador.

Tourism Minister Rosi Prado de Holguín said that this is a very important day for Ecuador's air connectivity because, after 25 years of absence, Ecuador once again welcomes Air France, one of the world's major airlines, that returns to our country to operate continuously from May to December of this year along the Paris-Quito-Paris route.

"I wish to highlight with great pleasure that the addition of new airlines coming to Ecuador, such as Air France, ratifies that our country is on the international tourist map and that the work performed by the National Government is giving good results. Therefore, I invite the tourism industry professionals to join the task of promoting our country in order to attract more French tourists", she added.

According to Andrew O'Brian, President and Director General of Corporación Quiport, "Air France's return after 25 years clearly evidences the development of air transportation in Quito. With this new flight we are providing better connectivity options with Europe and the world through the global Air France-KLM group network. It further demonstrates that Quito is being positioned as a growing destination worldwide."

The French airline offers its business class to the Ecuadorian market with the possibility of travelling to Europe through an experience that combines exclusivity and comfort "in an aircraft cabin prepared to provide a relaxing flight and a truly French-style experience", said Henri Hourcade, Air France/KLM Director General for Central and South America and the Caribbean.

In 2019, with support of the Tourism Ministry, the Ministry for Transport and Public Works, the Municipality of Quito, the Civil Aviation Directorate and Mariscal Sucre International Airport strategic allies, Corporación Quiport has expanded the city's connectivity with new destinations, also providing further offers to existing destinations and increased frequencies. This is a joint effort allowing to connect Quito and Ecuador with the world.

By the end of the year, and thanks to an incentives and a routes development strategy, it will be possible to expand the city's connectivity to new destinations (Sao Paulo-Gol, Paris-Air France, Santiago de Chile-LATAM, Toronto-Air Canada Rouge), improve the offer to existing destinations with new airlines (Lima-Peruvian; Madrid-Plus Ultra), and increase the frequencies (7 weekly flights to Madrid with Iberia). The addition of a new cargo airline (DHL) will also be possible this year.