Tampere the most attractive city in Finland by far

The Tampere region is the second largest economic region in Finland after the Helsinki Metropolitan Area. Around two-thirds of Finland’s economic activity is concentrated within a two-hour drive from Tampere. Together with its surrounding municipalities, Tampere creates one of the fastest growing city regions in Finland. The city is preparing for growth and investing over EUR 6 billion in the development of the city by 2030.

Watch a video about the attraction of the Tampere region.

According to studies, Finland is home to the happiest... 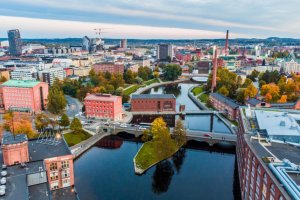 International movie production filmed in Tampere, Finland – Tuva Novotny and Peter Franzén among the stars of the thriller Abyss

Tampere’s AV industry continues its internationalisation. The Swedish thriller Abyss was filmed in the city in August last year. Film Tampere has...