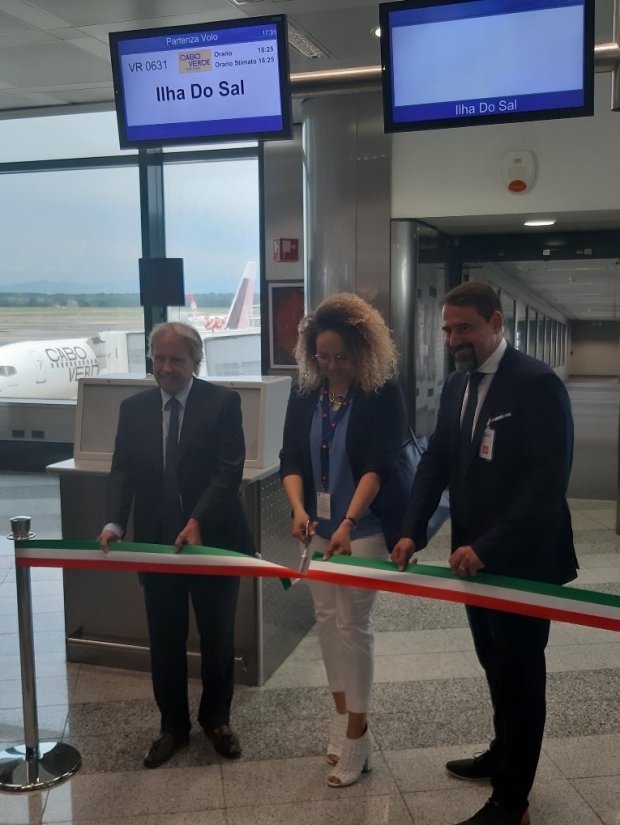 Caption: Cabo Verde Airlines returned to Milan Malpensa on 1 July with a strategic connection not just for the airport, but also for Italy. The direct service to Sal, will be operated four times weekly all year by the carrier’s 202-seat 757-200 fleet. "Today we are inaugurating something more than a new flight, we welcome a new model of courageous development that Cabo Verde Airlines proposes to the Italian market," said Aldo Schmid, SEA's Aviation Marketing Manager. The African carrier plans an intercontinental bridge thanks to its hub on Sal which serves three Brazilian destinations (Salvador de Bahia, Fortaleza and Recife) and one in Africa (Dakar).

These impressive results mean that MXP has exceeded the pre-dehubbing traffic record by more than two million passengers. “In the last 10 years the number of travellers using MXP has increased by 44%,” states Andrea Tucci, VP Aviation Business Development at SEA, “remarkably this has been achieved with just a 6% rise in aircraft movements.”

Throughput figures for 1H 2019 are also at a record level, with just under 12.5 million passengers being handled at MXP during the first six months of the year. “This +10% year-on-year growth between January and June is as a result of 30 new services and a total of 130 additional weekly flights in 2019,” adds Tucci.   “MXP’s route network is expanding and the airport now serves 200 destination in 77 nations, making Malpensa ninth in the world in terms of country markets served by hubs, ahead of airports like Doha, Munich, Brussels and Rome.”

Looking just at MXP’s June traffic results, 2.49 million passengers passed through the facility, representing a 11% spike in monthly throughput. “June 2018 was the airport’s record sixth month of the year, but this has now been replaced by June 2019,” says Tucci. Routes to new destinations like Sal from Cabo Verde Airlines, as well as Stavanger and Bergen from SAS which all commenced in June have contributed to the extraordinary traffic figures. Commenting on MXP’s airline portfolio, Tucci was bullish about the airport’s offer. “Seven of the top 10 best airlines in the world, as awarded by SkyTrax, take off from Malpensa.”

The Milan airport system closed 1H 2019 with a total of 16.8 million passengers, an increase of 6.4% compared to 2018, with Milan Linate having delivered 4.3 million passengers, down -3.9% year-on-year. This result was due in a large part to the restructuring of both Alitalia and Air Italy at Linate, with the carriers’ major international business routes still undergoing a period of consolidation.

The general slowdown in global cargo volumes which persisted throughout 2018 has continued into the first half of 2019, with MXP’s tonnage down by 6.7%. Over the rolling 12-month period the airport’s cargo result is marginally better, currently tracking at -4.9% versus the previous year. “It is not easy to predict how the cargo market will react at the moment, but we are confident that there will be a boost coming from the pharmaceuticals and e-commerce sectors which could lead to an air freight recovery in the last quarter of the year,” comments Tucci.

The remainder of S19 will be challenging for SEA as the city’s downtown Linate Airport temporarily closes on 27 July until 27 October for runway maintenance. “We are investing around €18 million to adapt Malpensa’s infrastructure and operating systems to welcome additional traffic from Linate,” explains Tucci. The check-in, Schengen gates and baggage sorting areas are being adapted to accommodate the surge in traffic, with a taxiway also being temporarily converted to an apron. “MXP is going to host in its peak season a 30% increase in capacity that, once the flights return to Linate, can easily be replaced by new carriers and flights thanks to the residual hub capacity in Milan that is not easy to find at many other European gateways,” concludes Tucci.

Malpensa is located in Lombardy, Italy’s richest region and the third richest in Europe, where the population is over 10 million inhabitants.

The Milan catchment area is wealthier, bigger and more dynamic than any other city in the country, with almost 70% of total Italian outbound traffic originating in Northern Italy. As a result, Milan’s routes generate a high share of premium traffic, equivalent to other major European hubs.

The Milan airport system is the biggest Italian generator of origin and destination traffic: 47 million passengers in Milan area (plus another nine million within 150-minute radius).

Malpensa is also the busiest cargo airport in Italy, handling more than 50% of the nation’s air freight. The airport is also the sixth busiest in Europe in terms of cargo volumes.

More than 210 global destinations are served direct from the city’s airports, which are operated by 105 airline partners.

26 May – Ryanair, twice-weekly service to Bristol;

New routes still to launch in 2019 (new destinations in bold):