Milan in the Open 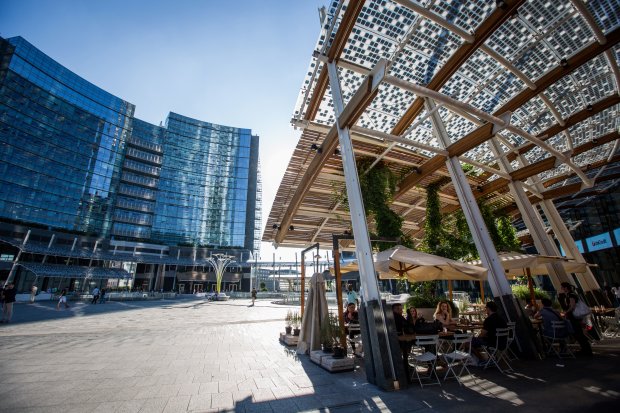 City Administration sped up the introduction of pedestrian areas and squares which are almost entirely car-free on a permanent basis and an ideal setting for a number of activities, with a premium on safe socializing.

One of the worst outcomes of the Covid-19 pandemic everywhere was the closing up of social and recreational venues, just the places where people would meet, talk and relax after work. Milan has a special tradition in this respect with the world-famous Aperitivo, one of the hallmarks of its way of life. As the new confinement rules were being introduced, bars and a drink with friends were no longer an option and people were left with a hollow feeling of disappointment.

Worse than the shift in everybody’s routine was the dire economic impact of the closing down. Bars, cafés and restaurants were suddenly out of work. Owners and employees, whether of luxury terrace bars or down-to-earth street-corner cafés, could only stand still and wait for better news, losing money and jobs in the meantime. Some may never be back in business. Such a predicament would be extremely hard on anybody: much more so on the hard-working, entrepreneurial Milanese bartenders.

However, things improve, and new beginnings can be fought for. Some of the measures the City has introduced to contrast the virus have proven unexpectedly beneficial to bars and their customers. Milan’s long fight with traffic congestion received a further boost when more low-speed zones were introduced and new cycling lanes were hastily painted on the sides of the main streets. The width of carriageways was reduced to allow for more social distancing-induced pedestrian and bicycle traffic. Pavements were widened by appropriating parking spaces. And bars were encouraged to make the most of it by placing tables and chairs outside, in the liberated space, in order to allow for safe service.

Not only that, but the City Administration sped up the introduction of pedestrian areas (Isole Pedonali) and squares (Piazze Aperte) which are almost entirely car-free on a permanent basis and an ideal setting for a number of activities, with a premium on safe socializing. The first experiments are in the very lively quarter of Isola and in the Porta Venezia/via Lazzaretto area, Milano’s LGBTQ+ district. Both are well known for their welcoming bars and intense nightlife. On to the Brera-Garibaldi area (Largo Treves), to Leonardo’s Last Supper (via Giovine Italia), to Palazzo Reale’s backstreets (via Santa Tecla), the Navigli, and others. More are coming, and many more are the reduced speed streets being identified.

Bars, restaurants and businesses are a vital part of this process. Merchants present the City Administration with their requests and suggestions regarding the introduction of areas where they would like to expand in the open. They are rewarded with a fast track procedure for authorisations and no taxes on the occupation of public soil until October 31st.  More than 800 authorisations for more than 21.000 Sq. m have already been granted. Traffic-free areas will be clearly marked by white and blue square signs showing children playing: signage costs are on the businesses.

All these measures are experimental and will be re-evaluated. Nevertheless, it is difficult to believe that Milan’s long-term goal to become greener and more liveable will be hindered. One only needs to think about the great pedestrianised area – possibly Europe’ longest – that will come into being as soon as work on the new blue Metro line is finished, linking Parco Sempione with the Duomo and on, all the way to the State University and Largo Augusto. Bars may well continue to occupy the streets of the city into the future, making it more and more comfortable for Aperitivo aficionados and boosting the bartenders’ trade.

“has written Italians choose the mountains for holidays”