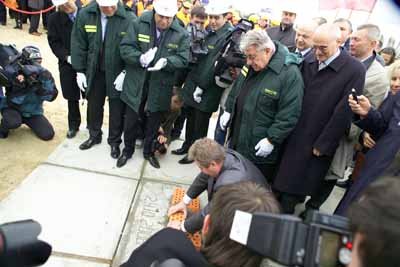 “Boryspil” is not only an international airport that has the potential to become a key airport in Eastern Europe, but it is also the face of our country within the international air transport market”

On the 24th of October 2008, at the “Boryspil” International Airport, at a specially assigned and prepared site for the building of terminal “D”, an inaugural placement of the foundation stone took place attended by, the Minister of transportation and communication of Ukraine Josip Vinsky, Ambassador of Japan in Ukraine Mr. Tadashi Izava, Ambassador of Turkey in Ukraine Mr. Erdogan Isdjana, Boryspil vice mayor Mikola Korneychuk, vice head of Boryspil town administration Anatoly Bernadskiy, President of the company “Dogus” Burak Talu and General Manager of SE IA “Boryspil” Boris Shakhsuvarov.


During the ceremony the Minister of transportation and communication of Ukraine stated the principle building schedule of the new facility, the fulfillment of set deadlines and the construction quality standards to be achieved. “There are two important positions for us, such as work deadlines and quality of construction”, - said Josip Vinsky. –“Boryspil” is not only an international airport that has the potential to become a key airport in Eastern Europe, but it is also the face of our country within the international air transport market”.

Turkish company “Dogus Insaat” has made a commitment to build a terminal within 26 and not 29 months, which is three months less than a previous term; that means the completion deadline will be January 2010.


Josip Vinsky noted that the number of flights is increasing by 10-12% annually. The quantity of passengers using services of Ukrainian airlines has approximated 5 million for the nine months of this year. “In comparison, the same results were in the whole of 2007”, - said the Minister. “I’m sure that “Boryspil” state airport will meet the growing needs in passenger transportation. We’ll be able to significantly increase the carrying capacity of “Boryspil” due to the new terminal and have it reach 12-14 million passengers per year, - said the Minister. – it is estimated the carrying capacity of the terminal “D” will be 3 thousand people per hour, i.e. it should double passenger throughput at “Boryspil” compared with current indexes”.

The projected terminal complex stipulates the construction of a passenger terminal, platform for aircraft, automobile roads, trestle bridge, parking lots for automobiles, rain drainage collectors and other industrial and technological features. The new passenger terminal will have a complex configuration covering an area of 122õ643,8 meters holding 14 thousand people simultaneously.