Expansion and reconstruction of the Katowice Airport passenger terminal B 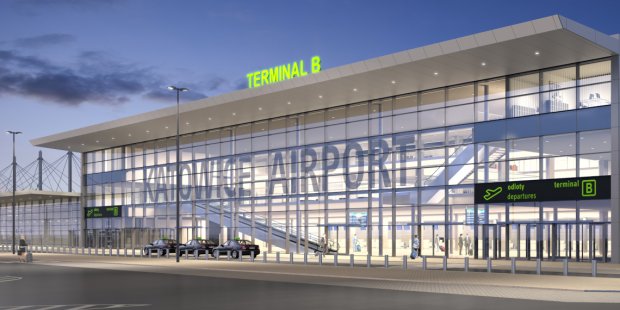 Górnośląskie Towarzystwo Lotnicze SA, a company managing Katowice Airport, in an open tender procedure under the Public Procurement Law, chose a contractor for the reconstruction and expansion of the passenger terminal B. The winner of the tender procedure, in which five entities submitted offers, was the company "Promus Ruda Śląska Sp. z oo ". The contract value is PLN 77.4 million net.

The investment objective is to improve the work of Katowice Airport, through the new functional layout of passenger terminal B, which provides a fundamental improvement in the efficiency and quality of passenger service and adjustment of the security control system to higher, planned standards.

Passenger terminal B was put into use in July 2007. By mid-2015, all the outbound and arrival traffic between Katowice Airport and the countries of the Schengen area was served there. In mid-2015, the arrival functions were canceled at the terminal, which were transferred to the newly opened C terminal. During 12 years of operation of terminal B (from July 2007 to July 2019), approximately 14 million passengers were served there, at the same time from the grid Katowice Airport has used approximately 37.3 million passengers.

As part of the investment to expand and reconstruct the Passenger Terminal B, the space and volume of the building will be increased. Before the development of usable property was 12 213 m 2 , the extension 17 reaches 187 m 2 , or 40% more. Before expansion, the volume of the passenger terminal B is 88 380 m 3 , after completion of the investment, it will increase by 35% to 120 256m 3 .

The object will not only be enlarged, but virtually entirely in the middle replaced. One can try to say that the middle of passenger terminal B will be rebuilt in a significant part.

Starting from the parking lots, the terminal will obtain a new façade that will be architecturally consistent with elevations of terminals A and C, which will improve the aesthetics of the southern part of the terminal infrastructure. An important change will also be shifting the facade of Passenger Terminal B to the south by approx. 17.5 meters and equalizing it with the C terminal line, which will enable the connection of objects. This operation will have an impact on the ground floor areas of the public terminal B, which will increase by as much as 1,900 m 2 .

Inside the publicly accessible hall, significant changes will also take place, consisting in the separation of the zone of the ticket and baggage checkpoints with the security control zone. Currently, both zones are located on the ground floor. This change will be possible due to the construction of openings between the ground floor and the first floor, as a consequence an additional area will be obtained on the first floor and a new security control zone will be created there. The number of control stations will increase from 6 to 8. The area on the ground floor, released thanks to this operation, will be developed with new ticket and luggage control stations, their number will increase from 18 to 28. It is worth noting that the two will be dedicated to an independent check-in with the option of self-giving Checked baggage.2 . In addition, the Fast Track room will be enlarged, its bandwidth will increase by using two gates to control people. The communication between the ground floor and the first floor will be provided by moving pavements called travelatory.

After the screening of passengers, large, positive changes will also be waiting for passengers. Firstly, the departure hall area will grow significantly. By encapsulating a portion of a void between the first and second floor in a restricted area, obtained additional space on the second floor, which are arranged executive lounge area of 350 m 2 , and a restaurant with a view of the apron. A duty free shopping zone will be built from scratch. It is worth emphasizing that a new, larger toilet system will be created both on the public and departure halls.

The project will also include the reconstruction of the external facade from the side of the airport, between the ground floor and the first floor. Three external staircases will be added, which will be located behind the service road running along the terminal and will be connected to the building by means of bridges with a steel structure. Each frame will have two independent strings for passengers, so that the number of all the garments will increase from 10 to 16.

It would not be possible to effectively increase the capacity of the whole building without creating a new luggage room. A new system of transport of registered luggage has been designed, which will be equipped with equipment for security control adjusted to standard 3. The obligation to install new devices for security control results from Commission Implementing Regulation (EU) 2015/1998 of 5 November 2015 laying down detailed measures for the implementation of common basic standards on civil aviation security.

As far as the baggage transport system is concerned, 28 checkpoints were designed in the check-in zone, divided into two islands, check-in arranged along the sorting area. Each check-in island will have a dedicated screening machine (EDS). The system will have a three-level luggage control. The real maximum efficiency of the new system will be 1 885 pieces of luggage per hour.

Construction works will commence in September 2019 and will last until the end of the first half of 2021 at the latest. In their course, various exclusions of the functionality of the passenger terminal B are planned. The initial schedule, which may be slightly changed, assumes that by August 31, 2020, basic functionalities related to check-in, security check and passenger boarding will be available. At the beginning of the third quarter of 2020, Passenger Terminal B will be closed to return to operation with doubled power and in the new version, at the latest by the end of the first half of 2021. During temporary shutdown of terminal B, travelers to Schengen countries will be served in passenger terminal A and temporary passenger terminal T. For the purpose of this facility, the so-called old cargo terminal. At T-terminal, 4 check-in and check-out counters, 3 or 4 security checkpoints and 4 boarding gates will be available. The facility will contain toilets, and in part, after a security check, a duty-free shop.

The extension and modernization of Passenger Terminal B will be a challenge, because it will be carried out on a bustling, airport organism. That is why we would like to apologize for any inconvenience and ensure that together with the contractor, we will do everything to minimize it. By using our channels on social media and website in advance, we will inform you about any inconvenience related to the reconstruction and expansion of Passenger Terminal B.

The result of the expansion and reconstruction of passenger terminal B will be an increase in capacity, which counts 10 hours a day, with the intensity allowing continuous operation without a decrease in comfort will amount to 1,800 passengers per hour and 18,000 per day. Thus, the annual capacity of the facility will increase from 2 million to 4 million travelers, and the entire terminal infrastructure from around 6 million to 8 million passengers. The area of passenger terminals will increase to 34,000 m 2 .