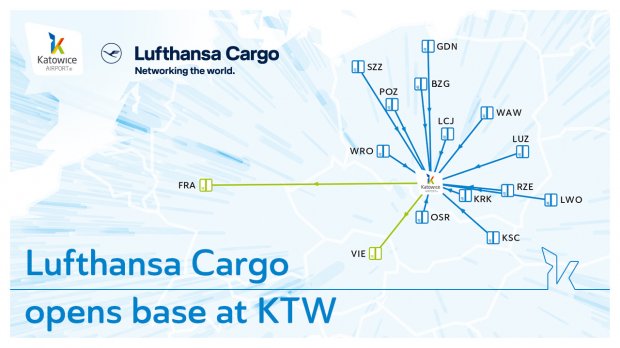 Shipments to and from Poland will be consolidated at KTW

Beginning on 4 January 2021, Lufthansa Cargo customers’ shipments transported to and from Poland will be consolidated at Katowice Airport. By launching a single freight integration point in the RFS (Road Feeder Service) model, it will be possible to increase the number of connections offered from Poland to the two main Lufthansa Cargo bases operating at the airports in Frankfurt and Vienna. Furthermore, by cooperating with the local ground handling agent at Katowice Airport, the entire logistics process will be more efficient, resulting in considerable saving of time, especially in case of transit packages.

“Due to the increase in our operations at Katowice Airport, we can offer our clients both more frequent connections and faster transport times. This is especially important during a crisis, when the time of freight delivery and the reliability of the entire process are of key importance,” says Wojciech Ryglewicz, Lufthansa Cargo Sales and Handling Director in Central and Eastern Europe.

Before the further journey to the LH Cargo terminals in Frankfurt or Vienna, shipments not only from Poland, but also from other Central European stations in Lviv, Košice and Ostrava, will be consolidated at Katowice Airport.

“We have been focusing on diversifying the infrastructure at Katowice Airport for the last 15 years. It is why we created a new cargo zone in the southeastern part of the airport. In 2016, we opened a new cargo terminal with an area of 12 thousand sq. m. To the south of the object, a big car park with internal roads was built; to the north, an apron for cargo aircraft with an area of nearly 9 hectares was constructed. During the coronavirus pandemic, which – without a shadow of doubt – is the biggest crisis challenge in the history of aviation, we did not waste time, and signed an agreement with Lufthansa Cargo. The act of launching a Polish RFS hub of this airline at Katowice Airport is a quantum leap in the development of freight transportation at Katowice Airport,” says Artur Tomasik, President of the Board of Górnośląskie Towarzystwo Lotnicze S.A., the company managing Katowice Airport.

Katowice Airport is the biggest regional cargo airport in Poland. In 2019, over 20 thousand tonnes of freight were transported to and from the airport. The airport will end 2020, in spite of the coronavirus pandemic, with a similar result.

RFS (Road Feeder Service) refers to transport of goods by trucks between airports carried out on behalf of airlines. It must be emphasised that – while taking into consideration regulations – RFS trucks are considered air transport; each transport is assigned a flight number.